We Set the Dark on Fire Lib/E (Compact Disc) 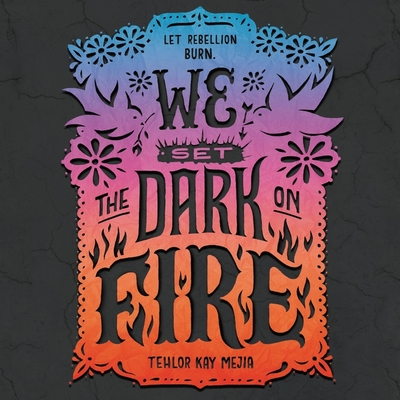 A magical realist fantasy about a society where men of high class and social status have two wives: one that tends to his business and one that attends to his home. It comes from a legend about a king who married both the sun and the moon. The protagonist of the story gets paired with her arch-rival when she marries the president of the country, part of a long line of corrupt politicians, and she has to use her position to go undercover to facilitate a rebellion and uprising. Oh, she also falls in love with the arch-rival. So it really has it all: fantasy, magical lore, political unrest, gay, and lots of action. It's marketed as a YA novel, but it's good for anyone who is interested in fantasy or dystopian worlds!

“There are only two outcomes when you finish at the Media School for Girls: a Primara, or First Wife, who is to act as the partner to her husband and run his household, or a Segunda, or Second Wife, who is in charge of being beautiful and bearing his children. Each man gets one of each. Dani is the school’s best student and the top Primara pick, so it’s no surprise when she’s chosen by the candidate favored to become their country’s next president. But Dani has a past that she will do everything in her power to protect. If you enjoy The Handmaid’s Tale, but are looking for a YA twist, this is the book for you. I definitely recommend this one.”
— Jennifer Jones, Bookmiser, Roswell, GA

"We Set the Dark on Fire burns bright. It will light the way for a new generation of rebels and lovers." --NPR.org

In this daring and romantic fantasy debut perfect for fans of The Handmaid's Tale and Latinx authors Zoraida C rdova and Anna-Marie McLemore, society wife-in-training Dani has a great awakening after being recruited by rebel spies and falling for her biggest rival.

At the Medio School for Girls, distinguished young women are trained for one of two roles in their polarized society. Depending on her specialization, a graduate will one day run a husband's household or raise his children. Both paths promise a life of comfort and luxury, far from the frequent political uprisings of the lower class.

Daniela Vargas is the school's top student, but her pedigree is a lie. She must keep the truth hidden or be sent back to the fringes of society.

And school couldn't prepare her for the difficult choices she must make after graduation, especially when she is asked to spy for a resistance group desperately fighting to bring equality to Medio.

Will Dani cling to the privilege her parents fought to win for her, or will she give up everything she's strived for in pursuit of a free Medio--and a chance at a forbidden love?