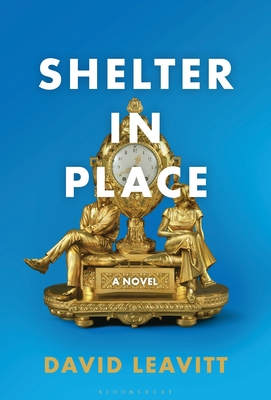 Shelter in Place chronicles the upper middle upper upper crust of New York City society. In the months following the election of Donald Trump, they are plunged into uncertainty and doubt. Eva, the group’s north star, copes by buying an apartment in Venice. Her husband embarks on an affair. It’s hard to imagine a softer target for satire, but Leavitt’s verve and wit make this novel a joy to read. Shelter in Place is a classic six of a novel, fully furnished with bon mots and apercus.

It is the Saturday after the 2016 presidential election, and in a plush weekend house in Connecticut, an intimate group of friends, New Yorkers all, has gathered to recover from what they consider the greatest political catastrophe of their lives. They have just sat down to tea when their hostess, Eva Lindquist, proposes a dare. Who among them would be willing to ask Siri how to assassinate Donald Trump? Liberal and like-minded-editors, writers, a decorator, a theater producer, and one financial guy, Eva's husband, Bruce-the friends have come to the countryside in the hope of restoring the bubble in which they have grown used to living. Yet with the exception of one brash and obnoxious book editor, none is willing to accept Eva's challenge.

Shelter in Place is a novel about house and home, furniture and rooms, safety and freedom and the invidious ways in which political upheaval can undermine even the most seemingly impregnable foundations. Eva is the novel's polestar, a woman who moves through her days accompanied by a roving, carefully curated salon. She's a generous hostess and more than a bit of a control freak, whose obsession with decorating allows Leavitt to treat us to a slyly comic look at the habitués and fetishes of the so-called shelter industry. Yet when, in her avidity to secure shelter for herself, she persuades Bruce to buy a grand if dilapidated apartment in Venice, she unwittingly sets off the chain of events that will propel him, for the first time, to venture outside the bubble and embark on a wholly unexpected love affair.

A comic portrait of the months immediately following the 2016 election, Shelter in Place is also a meditation on the unreliable appetites-for love, for power, for freedom-by which both our public and private lives are shaped.

David Leavitt's fiction has been a finalist for the PEN/Faulkner Prize, the National Book Critics' Circle Award and the LA Times Fiction Prize, and shortlisted for the IMPAC Dublin Award. His writing has appeared in the New Yorker, the New York Times, Harper's and Vogue, among other publications. He lives in Gainesville, Florida, where he is Professor of English at the University of Florida and edits the literary magazine Subtropics.