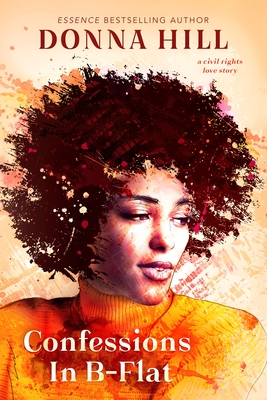 Essence bestselling author Donna Hill brings us an emotional love story set against the powerful backdrop of the civil rights movement that gripped a nation—a story as timely as it is timeless...

The year is 1963. In Harlem, the epicenter of Black culture, the fight for equality has never been stronger. The time is now. Enough is enough. Yet even within its ranks, a different kind of battle rages. Love thy neighbor? Or rise up against your oppressors?

Jason Tanner has just arrived in New York to help spread the message of his mentor, Dr. Martin Luther King, Jr., of passive resistance, while beat poet Anita Hopkins believes the teachings of Malcolm X with all her heart: that the way to true freedom is “by any means necessary.” When Jason sees Anita perform her poetry at the iconic B-Flat lounge, he’s transfixed. And Anita has never met anyone who can match her wit for wit like this…

One movement, two warring ideologies—can love be enough to unite them?

Confessions in B-Flat is a celebration of the hard-won victories of those who came before us, and a stark reminder of just how far we still have to go.

Donna Hill began her career in 1987 writing short stories for the confession magazines. Since that time, she has more than ninety published titles to her credit since her first novel was released in 1990 and is considered one of the early pioneers of the African American romance genre. Three of her novels have been adapted for television. She has been featured in Essence, the New York Daily News, USA Today, Today’s Black Woman, and Black Enterprise, among many others. She has received numerous awards for her body of work—which crosses several genres—including the Career Achievement Award, the first recipient of the Trailblazer Award, the Zora Neale Hurston Literary Award, and the Gold Pen Award, among others, as well as commendations for her community service. As an editor, she has packaged several highly successful novels and anthologies, two of which were nominated for awards. Donna is a graduate of Goddard College with an MFA in Creative Writing and is currently in pursuit of her Doctor of Arts in English Pedagogy and Technology. She is an Assistant Professor of Professional Writing at Medgar Evers College and lives in Brooklyn, New York, with her family.

BERNICE L. McFADDEN is the author of The Book of Harlan (winner of the 2017 American Book Award and the 2017 NAACP Image Award for Outstanding Literary Work.) This in addition to eight other critically acclaimed novels including Sugar, Loving Donovan, Gathering of Waters (a New York Times Editors’ Choice and one of the 100 Notable Books of 2012), Glorious, which was featured in O, The Oprah Magazine and was a finalist for the NAACP Image Award. She is a four-time Hurston/Wright Legacy Award finalist, as well as the recipient of three awards from the BCALA. Praise Song for the Butterflies is her latest novel, which was long-listed for the 2019 Women's Prize.