The Last Bookseller: A Life in the Rare Book Trade 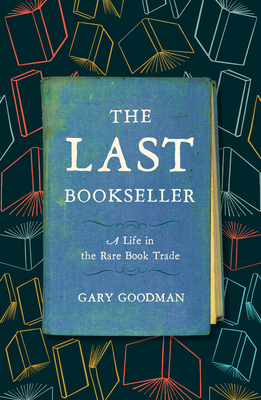 A wry, unvarnished chronicle of a career in the rare book trade during its last Golden Age

When Gary Goodman wandered into a run-down, used-book shop that was going out of business in East St. Paul in 1982, he had no idea the visit would change his life. He walked in as a psychiatric counselor and walked out as the store’s new owner. In The Last Bookseller Goodman describes his sometimes desperate, sometimes hilarious career as a used and rare book dealer in Minnesota—the early struggles, the travels to estate sales and book fairs, the remarkable finds, and the bibliophiles, forgers, book thieves, and book hoarders he met along the way.

Here we meet the infamous St. Paul Book Bandit, Stephen Blumberg, who stole 24,000 rare books worth more than fifty million dollars; John Jenkins, the Texas rare book dealer who (probably) was murdered while standing in the middle of the Colorado River; and the eccentric Melvin McCosh, who filled his dilapidated Lake Minnetonka mansion with half a million books. In 1990, with a couple of partners, Goodman opened St. Croix Antiquarian Books in Stillwater, one of the Twin Cities region’s most venerable bookshops until it closed in 2017. This store became so successful and inspired so many other booksellers to move to town that Richard Booth, founder of the “book town” movement in Hay-on-Wye in Wales, declared Stillwater the First Book Town in North America.

The internet changed the book business forever, and Goodman details how, after 2000, the internet made stores like his obsolete. In the 1990s, the Twin Cities had nearly fifty secondhand bookshops; today, there are fewer than ten. As both a memoir and a history of booksellers and book scouts, criminals and collectors, The Last Bookseller offers an ultimately poignant account of the used and rare book business during its final Golden Age.

Gary Goodman is a semi-retired rare book dealer in Stillwater, Minnesota. He put six kids through college selling secondhand books, a feat that makes him a Genuine American Hero. He is coauthor of The Stillwater Booktown Times and The Secret History of Golf in Scotland..

The Last Bookseller: A Life in the Rare Book Trade (Hardcover)