Fire on the Mountain: The True Story of the South Canyon Fire (Paperback) 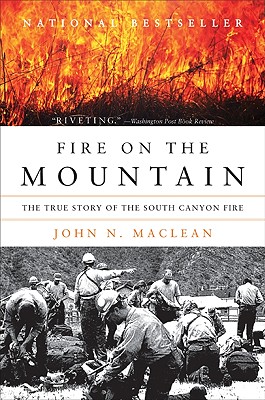 In 1994, a wildfire on Colorado's Storm King Mountain was wrongly identified at the outset as occurring in South Canyon. This unintentional, seemingly minor human error was merely the first in a string of mistakes that would be compounded into one of the greatest tragedies in the annals of firefighting. Before it was done, fourteen courageous firefighters—men and women, hotshots, smokejumpers, and helicopter crew—would lose their lives battling the deadly, so-called South Canyon blaze. John N. Maclean’s award-winning national bestseller Fire on the Mountain is a stunning reconstruction of the killer conflagration and its aftermath.

JOHN N. MACLEAN is an award-winning author and journalist. He spent thirty years at the Chicago Tribune, most of that time as a Washington correspondent. After leaving the Tribune, Maclean wrote five nonfiction books about wildland fire that are considered a staple of fire literature as well as training material for firefighters. Maclean is the son of Norman Maclean, author of A River Runs Through It. The younger Maclean, an avid fly fisherman, lives in Washington, DC, and at a family cabin in Montana.