Virtual Event The Sting of Love By Janet Graber 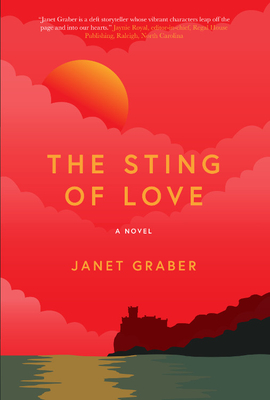 Georgina is on a visit to her widowed father in England to celebrate his seventy-seventh birthday, decades after he fought in WWII. She is astonished when he asks if she will accompany him back to Trieste, in Northern Italy. He has always refused to set foot in Europe again. What changed? And why now? Captain James Drummond survived the battlefields of North Africa and Italy. Instead of his anticipated return home to wife and four-year-old daughter whom he had yet to meet, he was assigned to the grim task of military occupation in Trieste.

On a summer patrol in 1945 in the disputed hills above Trieste, he encountered a group of Yugoslav partisans, bathing. When he glimpsed a woman emerging from the pool, water cascading down her body, a new conflict emerges with no clear lines, one he had to navigate alone. The war-weary Captain was faced with heart-wrenching choices.

Meanwhile, Georgina faces her own demons—a stale marriage, a secret affair, and her father's new revelations. Weaving historical facts with fictional characters, The Sting of Love moves seamlessly between Georgina's tumultuous life and that of her father in the aftermath of WWII, viewed through the lens of their several weeks together in Trieste.

Janet Graber was born in the middle of WWII in Northern England. She traveled widely, ended up in the United States, married, raised a family, and eventually followed her dream of writing stories.

After publishing picture books and novels for teens, honors followed, including a McKnight Artist Fellowship in Children's Literature, The Association of Educational Publishers Distinguished Achievement Award, and A Junior Library Guild Selection. She was also a Minnesota Book Award Finalist in the Young Adult Category. She teaches occasionally at the Loft Literary Center in Minneapolis, and mentors writers in her home.

The Sting of Love is her first novel written for an adult audience. Janet lives in Minnesota, cherishes log fires, green trees, reading in bed, drifting snow, tea at three o'clock with ginger trifle, and the company of good friends and family.

The Sting of Love (Paperback)