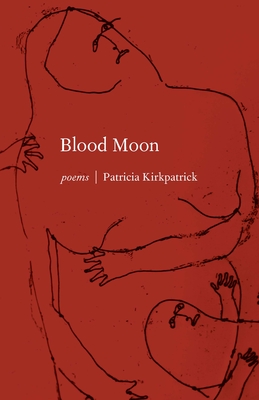 Troubled and meditative, Blood Moon is an examination of racism, whiteness, and language within one woman’s life. In these poems, words are deeply powerful, even if—with the onset of physical infirmity—they sometimes become unfixed and inaccessible, bringing together moral and mortal peril as Patricia Kirkpatrick’s speaker ages. From a child, vulnerable to “words / we learned / outside and in school, / at home, on television”: “Some words you don’t say / but you know.” To a citizen, reckoning with contemporary police brutality: “Some days need a subject an an action / or a state of being because it’s grammar. / The cop shot. The man was dead.” And to a patient recovering from brain surgery: “I don’t have names. / Words are not with me.”

Throughout the collection, the moon plays companion to this speaker, as it moves through its own phases, disappearing behind one poem before appearing fully in the next. In Kirkpatrick’s hands, the moon is confessor, guide, muse, mirror, and—most of all—witness, to the cruelty that humans inflict upon one another. “The moon,” she reminds us, “will be there.”

Patricia Kirkpatrick is the author of Blood Moon as well as Odessa, which was awarded the first Lindquist & Vennum Prize for Poetry and the 2013 Minnesota Book Award. An editor and teacher, she has taught writing in many colleges and community settings, most recently the University of Minnesota MFA program. Her poems have appeared in Poetry, Prairie Schooner, the New York Times, and elsewhere. In 2020 she wrote the script, read by Sally Wingert, for the VocalEssence concert “Rightfully Hers” chronicling women’s suffrage.*

In conversation with Sally Wingert

Sally Wingert is celebrating her 38th year as a professional actor based in the Twin Cities. She has worked around the country in such theaters as ART in Boston, Yale Rep, MaCarter Theater, Asolo Rep and many others but the Twin Cities is home.  With over 90 productions at the Guthrie Theater, many with Theater Latte Da, Ten Thousand Things, Mixed Blood, Minnesota Jewish Theater and many others, Sally feels this is the most extraordinary place to be an artist.

For more information about events at Next Chapter Booksellers,