Three days after I was expelled from the Marable School for Girls, our poor Simon arrived. 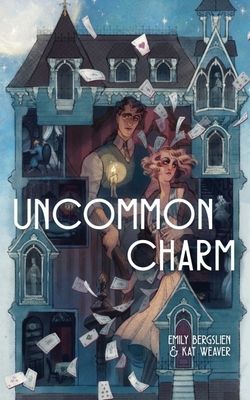 In the 1920s gothic comedy Uncommon Charm, bright young socialite Julia and shy Jewish magician Simon decide they aren't beholden to their families' unhappy history. Together they confront such horrors as murdered ghosts, alive children, magic philosophy, a milieu that slides far too easily into surrealist metaphor, and, worst of all, serious adult conversation.

Kat Weaver and Emily Bergslien are writers (and artists) who live in Minneapolis with their two birds.

Kat's fiction has appeared in Apex Magazine, Lackington's, Timeworn Literary Journal, and elsewhere. Her art can be found at http://kathrynmweaver.com, and on Twitter @anoteinpink. Emily is a Twin Cities bookseller whose reviews have been published in The Riveter magazine. Find her on Twitter @eudaemanical.

Their novella Uncommon Charm will be a part of Neon Hemlock’s 2022 Novella Series.