Rob Jung reads from The Reaper 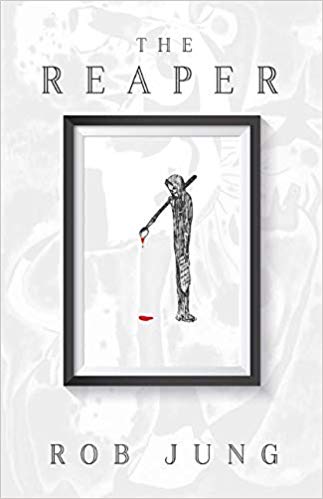 Against the backdrop of the Spanish Civil War and the rise of the Third Reich, powerful and dangerous interests compete for possession of The Reaper, a painting by Spanish artist Joan Miro. The painting disappears in 1937 at the end of the Paris Exposition, leaving the art world and law enforcement authorities to speculate about the unsolved mystery.

mother of struggling artist Hamilton Blethen, learns of the

vanished painting and contrives a scheme to atone for casting him aside as a toddler. When she secretly arranges to have him paint a copy of The Reaper, Hamilton is convinced he is being asked to paint a forgery, posing an ethical dilemma for the artist at the same time he is being forced by his love for a woman to come to terms with the pain of being abandoned.

The scheme turns violent when it interferes with Magnolia’s

rise to the highest levels of social prominence, but a shattered Blethen finds redemption in The Reaper.

Born in the wine country of California; grew up in a beautiful, little Mississippi River town in Wisconsin; educated in the Minnesota state university system and Harvard Law School, Rob Jung now lives the writer's life in suburban St. Paul, Minnesota, with his wife, Kathy.

A newspaper writer for seven years while getting his undergraduate degree at Winona State University, Jung has practiced law for 47 years. He began working on his fiction-writing craft more than a decade ago.

A life-long student of history, geography and religion, Jung has traveled in every continent except Antarctica, and his stories often find their origins in historical events from countries outside the U.S.

He has written four novels, the first two of which are safely tucked in the back of a drawer so as not to injure either reader or the literary world. His third novel, Cloud Warriors, is published by John Hunt Publishing (UK). The Reaper, his fourth novel, is currently in publication with an expected release date of June 1, 2019.  He has also had nonfictional work published in newspapers, legal forums and periodicals of limited distribution.

*Rob Jung is the pen name of Robert W. Junghans. He also writes limericks and tells stories under the name "C.J. Rakham"