To celebrate a new anthology of poems called Healing the Divide: Poems of Kindness and Connection, the editor and regional poets featured in the book will read at a free event on Wednesday, July 10, 2019, 7 P.M. at Next Chapter Bookstore, 28 Snelling Avenue, St. Paul, Minnesota. 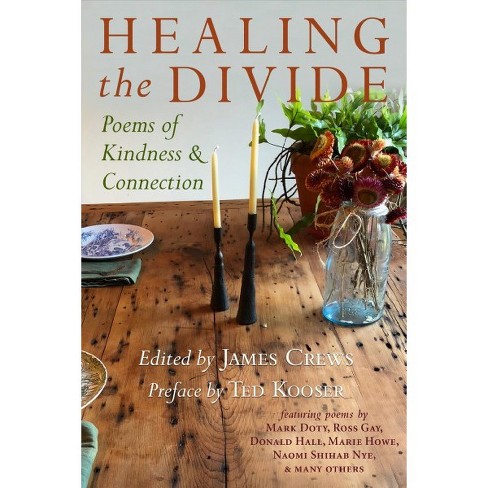 This past April, Green Writers Press, an environmentally minded publisher based in Vermont, brought out an anthology of poetry that's already generating significant public attention. The poets in the book, from all walks of life, and from all over the United States, show the possibility of creating what Dr. Martin Luther King called the "beloved community," a place where we see each other as connected. Healing the Divide urges us, at this fraught political time, to move past the negativity that often fills the airwaves, and to embrace ordinary moments of amity and kindness.

Among the poets in the anthology are Mark Doty, Ross Gay, Donald Hall, Naomi Shihab Nye, as well as those regional poets reading at the bookstore.

Healing the Divide: Poems of Kindness and Connection was edited by James Crews, a poet and mindfulness teacher who lives with his husband on an organic farm in Vermont. Crews assembled this book, handpicking poems appealing to a wide audience.

In his preface to the anthology, former U.S. Poet Laureate and Pulitzer Prize winner, Ted Kooser, writes: “What breathes from these pages is kindness and tenderness, qualities especially attractive and necessary at a time when warmth and tolerance and inclusion are rare qualities.”

James Crews, editor of Healing the Divide, is a regular contributor to The London Times Literary Supplement, and his work has appeared in Ploughshares, Crab Orchard Review, and The New Republic, among other journals. The author of two collections of poetry, The Book of What Stays (Prairie Schooner Prize, 2011) and Telling My Father (Cowles Prize, 2017), he lives on an organic farm in Shaftsbury, Vermont with his husband, and teaches creative writing at SUNY-Albany.

Margaret Hasse is the author of five books of poems from Stars Above, Stars Below (1985) to Between Us (2016). She is a recipient of grants and fellowships from the National Endowment for the Arts, McKnight Foundation, Loft Literary Center’s Career Initiative Program, Minnesota State Arts Board, and Jerome Foundation. Her work has been published in other anthologies (Where One Voice Ends, Another Begins: 150 Years of Minnesota Poetry, and To Sing Along the Way: Minnesota Women’s Voices from Pre-Territorial Day to the Present, among others), magazines, broadsides, and unusual places such as sidewalks, public art, and in Garrison Keillor’s Writer’s Almanac. She lives in Minnesota.

Tom Hennen is the author of six books of poetry, including Darkness Sticks to Everything: Collected and New Poems (Copper Canyon Press, 2013), and was born and raised in rural Minnesota. After abandoning college, he married and began work as a letterpress and off-set printer. He helped found the Minnesota Writer’s Publishing House, then worked for the Department of Natural Resources wildlife section, and later at the Sand Lake National Wildlife Refuge in South Dakota. Now retired, he lives in Minnesota.

Marjorie Saiser is the author of five books of poetry, including I Have Nothing to Say About Fire (Backwaters Press, 2016) and co-editor of two anthologies. Her work has been published in American Life in Poetry, Nimrod, Rattle.com, Poetry Magazine. com, RHINO, Chattahoochee Review, Poetry East, Poet Lore, and other journals. She has received the WILLA Award and nominations for the Pushcart Prize. She lives in Wisconsin.

Connie Wanek is the author of four collections of poetry: Bon Fire (1997), winner of the New Voices Award from New Rivers Press; Hartley Field (2002), On Speaking Terms (2010), published by Copper Canyon Press, and Rival Gardens: New and Selected Poems, from University of Nebraska Press. She is also co-editor, with Joyce Sutphen and Tom Tammaro, of To Sing Along the Way: Minnesota Women Poets from Pre-Territorial Days to the Present (2006). Wanek was named a Witter Bynner Fellow of the Library of Congress by U.S. Poet Laureate Ted Kooser, and in 2009, was named George Morrison Artist of the Year. She lives in New Mexico.

Healing the Divide: Poems of Kindness and Connection (Paperback)