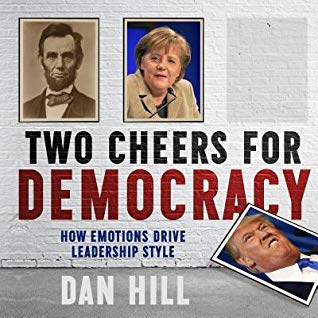 Not only in America, but around the globe democracy is under siege. In an era personified by Donald Trump, illiberal—increasingly hollow—democracies, and “strongman” dictatorships, it’s time to take a closer look at the nature of the leaders who shape our world. The policies or positions that leaders adopt may change, but rarely their personalities. All of us have signature facial expressions that reveal the emotions we gravitate to most often over time. The difference is that in leading a country, the head of state’s feelings can hold sway over events likely to greatly impact every citizen’s life and well-being.

In Two Cheers for Democracy, the focus is on identifying emotional patterns that help to predict three key things about leaders: will they prove to be competent, compelling, and compassionate in executing their official duties? This book analyzes all 44 U.S. presidents to date and every U.S. presidential debate ever held, from 1960 to 2016, in addition to 79 world leaders. It does so in a more intimate, rigorous, psychological manner than has ever been attempted before. With results from the American Political Science Association’s presidential greatness rankings, Gallup polls, and Freedom House’s annual survey of countries’ commitment to democracy as benchmarks, Two Cheers for Democracy takes seriously—in a unique way—the central question of today: what’s the personality of the people leading us, and can we trust them to look out for the public good?

Two Cheers for Democracy comes richly illustrated with photographs and charts, and includes an afterward with a look at the likely 2020 Democratic front-runners for The White House.

This event will be broadcast on C-SPAN Book TV

About the Author Dan Hill, Ph.D., is the founder and president of Sensory Logic, Inc., which pioneered the use of facial coding in business beginning in 1998. As an expert facial coder, Dan is the recipient of seven U.S. patents related to advanced methods for the scoring and analysis of facial coding data. He’s also a certified Facial Action Coding System (FACS) practitioner. Dan has done consulting work for over half of the world’s top 100 B2C companies. Among his five previous books is Emotionomics, chosen by Advertising Age as one of the top 10 must-read books of 2009, which featured a foreword by Sam Simon, co-creator of The Simpsons in its second edition. Dan’s TV appearances have ranged from ABC’s “Good Morning America,” Al Jazeera, Bloomberg TV, CNBC, CNN, ESPN, Fox, MSNBC, NBC’s “The Today Show,” and PBS, to The Tennis Channel. For radio, Dan has been interviewed by the BBC and NPR’s “Marketplace”. Print and digital coverage of Dan’s work has included: Admap, Advertising Age, Adweek, Allure, Entrepreneur, Fast Company, The Financial Times, Forbes China, Inc., Kiplinger’s, The Los Angeles Times, The New York Times, Politico, Time, USA Today, and The Wall Street Journal, in addition to his having been a columnist for Reuters. His essays were noted with commendation in the 1989, 1991 and 1994 editions of The Best American Essays. Since his education at St. Olaf College, Oxford University, Brown University, and Rutgers University, Dan has given speeches and led workshops in over 20 countries. Along with his wife, Karen Bernthal, he lives in St. Paul, Minnesota and Palm Desert, California.