Democracy Under Fire: Donald Trump and the Breaking of American History 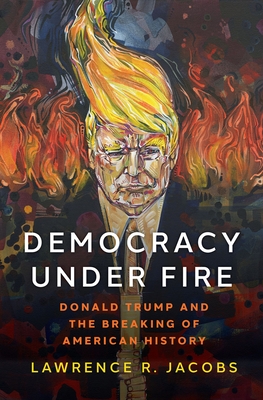 Donald Trump's presidency offered Americans a dire warning regarding the vulnerabilities in their democracy, but the threat is broader and deeper-and looms still.

January 6th was a disgrace, Senate Republican Leader Mitch McConnell solemnly intoned at the end of Donald Trump's second impeachment trial on February 13, 2021. As to the culprit, Senator McConnell declared that there is no question that President Donald Trump is practically and morally

responsible. Before Trump even ran for President, his disdain for the rules, procedures, and norms of American democracy and the US Constitution was well-known and led prominent Republicans to repudiate him as unfit for the GOP nomination. Given the clear-eyed assessment of candidate Trump, why

did the Republican Party nominate him as its presidential candidate in 2016 and then stand by him during the next four years?

Much of the attention paid to Trump's rise to power has focused on his corrosive personality and divisive style of governing. But he alone is not the problem. The vulnerability is much broader and deeper. The ascendance of Trump is the culmination of nearly 250 years of political reforms that

gradually ceded party nominations to small cliques of ideologically-motivated party activists, interest groups, and donors. Trump's rise is not an aberration but a predictable outcome of trends deeply rooted in American history but which accelerated in the last few decades.

In Democracy under Fire, Lawrence Jacobs provides a highly engaging, if disturbing, history of political reforms since the late-eighteenth century that over time dangerously weakened democracy, widened political inequality as well as racial disparities, and rewarded toxic political polarization.

Jacobs' searing indictment of political reformers concludes with recommendations to restrain the unbridled ambition of politicians who thrive on division and instead generate broad citizen engagement with tangible policy making.

Lawrence R. Jacobs is founder and director of the Center for the Study of Politics and Governance (CSPG) and holds the Walter F. and Joan Mondale Chair for Political Studies at the University of Minnesota's Humphrey School of Public Affairs. He is a member of the American Academy of Arts andSciences.

Democracy Under Fire: Donald Trump and the Breaking of American History (Hardcover)