Holiday Signing: "Defeating Scrooge: How to Harness the Power of Christmas Carols to Revive" By Renae Baker 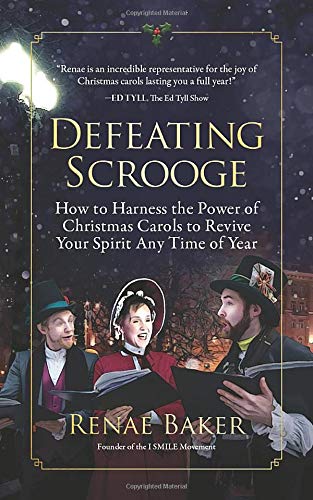 People suffer during the holidays for all sorts of reasons. Renae Baker learned, first hand, how painful it can be to struggle to find joy during the holiday season. But as the founder and director of a company of Broadway holiday carolers who treasures her Christmas spirit, she found it unacceptable to go through another December with no warmth of the season bringing her joy.

In Defeating Scrooge, Baker describes, with humor and pathos, the path which led her to her life’s work in caroling, her crisis of spirit and how she set about reviving it. In her journey to immerse herself more deeply into the carols, she discovers poignant life stories of the lyricists and composers, the countries in which they were written, what the climates in those countries were at the time and the catalysts which brought them to life. She also discovers fascinating histories about how the carols have affected people in profound ways long after their inceptions.

One of the truly original aspects about this book, aside from the fact that Baker is uniquely qualified to write it, is that she reflects on how we might apply the wisdom gleaned from the carols’ histories to our world and lives today. Baker shares her “Spirit Saver” process with us and explains what makes it work to reset and revive damaged “spirit triggers.” In addition to leading carols, Baker is also a sought-after acting coach in New York City. A scientific method she employs to guide her acting clients into roles in Broadway, film and television productions turns out to be the secret sauce in her process, and so she employs it now to guide us to a joyful and triumphant holiday season. The reader may take advantage of the workbook pages at the end of the book and begin their own journey through the carols. A perfect holiday gift!

Renae Baker is a professional singer actor, speaker and sometime television and radio cohost, as well as founder and director of I S.M.I.L.E. in New York Productions.

Defeating Scrooge: How to Harness the Power of Christmas Carols to Revive Your Spirit Any Time of Year (Hardcover)