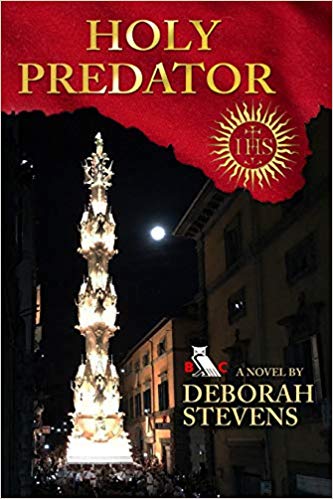 Could a symbol hidden in the U.S. one dollar currency hold the key to who is behind a plot to control over 200 billion dollars?

Barricades surround St. Peter’s Basilica and the scene of a gruesome murder. Alonso Garibaldi Poggiani head of Vatican Bank is dead. This, along with the unprecedented election of the first Jesuit Pope, many inside the Vatican wonder if their suspicions are coming true. A code of instructions found in an ancient document, known as the Monita Secreta, outline the methods to increase the Jesuits power around the world but repeatedly deny its existence. Cardinal McKenna calls his friend Anthony Andruccioli asking him to help find out who killed the banker. But, even more troubling is the question could the Pope be involved somehow. Anthony joins forces with the beautiful Christine and they become aware of another powerful group with international connections and must figure out who is the real enemy.

Deborah Stevens is a native of Detroit, Michigan who now lives in Minnesota. Stevens majored in Interior Design. Her interest in the arts and to detail is evident in her debut novel "The Serpent's Disciple" and the second in the series "Holy Predator" where she describes famous paintings, architectural landmarks and intriguing, little known facts. The first book "The Serpent's Disciple" has been honored with multiple coveted awards including The Pinnacle Book Achievement Award for best Thriller, A Book Excellance Award, American Fiction Award for best Religious Thriller, a finalist in the Best Book Awards, an Honorable Mention through the Great Midwest Book Festival, and a finalist in the International Book Awards for Religious Fiction. Deborah has traveled extensively to Europe, Mexico, Hawaii, and the Caribbean, and has a soft spot for her ancestral home of Italy. The sequel to "The Serpent's Disciple" will be released October 12 titled the "Holy Predator".