Marshmallow Clouds: Two Poets at Play Among Figures of Speech by Connie Wanek and Ted Kooser 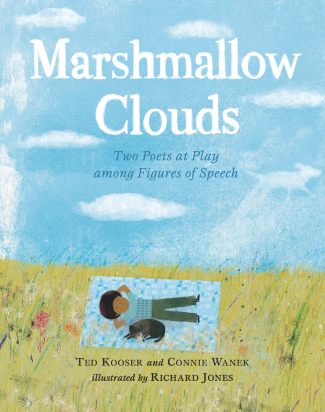 Marshmallow Clouds: Two Poets at Play Among Figures of Speech

Celebrated poets Ted Kooser along with Connie Wanek, and illustrator Richard Jones, explore figures of speech in a spirited and magical way—and invite our imaginations out to play.

A freewheeling romp through the world of imagery and metaphor, this quietly startling collection of thirty poems, framed by the four elements, is about art and reality, fact and fancy. Look around: what do you see? A clown balancing a pie in a tree, or an empty nest perched on a leafless branch? As poet Connie Wanek alludes to in her afterword—a lively dialogue with former US Poet Laureate Ted Kooser—sometimes the simplest sights and sounds “summon our imaginations” and cry out to be clothed in the alchemical language of poetry. This compendium of the fleeting and unexpected turns the everyday—turtles, trees, and tadpoles; cow pies, lazy afternoons, and pillowy white marshmallows—into poetic gold. A brilliant and timeless collaboration that evokes both the mystery and grandeur of the natural world and the cozy, mundane moments of daily life, this exquisitely illustrated collection is the go-to gift book of the season for poetry fans of all ages.

Connie Wanek is a grandmother now. She has written some books and still loves animals. Names still take a long time to think of, but there are so many names in the world, more all the time.

Ted Kooser was the US Poet Laureate from 2004 to 2006 and won a Pulitzer Prize for his book of poems Delights & Shadows. His picture books include Bag in the Wind and The Bell in the Bridge, both illustrated by Barry Root; House Held Up by Trees, a New York Times Book Review Best Illustrated Children's Book of the Year, illustrated by Jon Klassen; and Mr. Posey's New Glasses, an International Literacy Association Children's Choice, illustrated by Daniel Duncan. Ted Kooser lives in Garland, Nebraska