The World That the Shooter Left Us (Paperback) 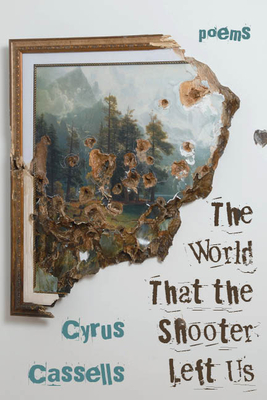 Not in our store, available to order

In the aftermath of the Stand Your Ground killing of his close friend’s father, poet Cassells explores, in his most fearless book to date, the brutality, bigotry, and betrayal at the heart of current America. Taking his cue from the Civil Rights and Vietnam War era poets and songwriters who inspired him in his youth, Cassells presents The World That the Shooter Left Us, a frank, bulletin-fierce indictment of unraveling democracy in an embattled America, in a world still haunted by slavery, by Guernica, Hiroshima, and the Holocaust, by climate catastrophe, by countless battles, borders, and broken promises—adding new grit, fire, and luster to his forty-year career as a dedicated and vital American poet.

Cyrus Cassells is the 2021 Poet Laureate of Texas. His honors include a Guggenheim fellowship, the National Poetry Series, a Lambda Literary Award, a Lannan Literary Award, two NEA grants, a Pushcart Prize, and the William Carlos Williams Award. His 2018 volume, The Gospel according to Wild Indigo, was a finalist for the NAACP Image Award, the Helen C. Smith Memorial Award, and the Balcones Poetry Prize. Still Life with Children: Selected Poems of Francesc Parcerisas, translated from the Catalan, was awarded the Texas Institute of Letters’ Soeurette Diehl Fraser Award for Best Translated Book of 2018 and 2019. He was nominated for the 2019 Pulitzer Prize in Criticism for his film and television reviews in The Washington Spectator. He teaches in the M. F. A. program at Texas State University and is the recipient of the 2021 Presidential Award for Scholarly / Creative Activity, one the university’s highest honors.

“Wrestling in the clutches of fury and mourning, Cassells—long a master purveyor of both the splendor and contradictions of the natural world, as well as the voluptuary elements of the self—turns his consummate clear-eyed gaze to a bleak and burgeoning brutality that threatens our days, siphons the spirit, and challenges the realm of the poet. The World That the Shooter Left Us is a world defined by stark boundaries and firepower, chalk outlines, rampant injustices and histories tainted with each and every version of sin. Cassells, a wily and relentless witness, doesn’t tiptoe through the maelstrom or allow the reader to turn away. Instead, he becomes the writer that this moment needs—one with the lyrical skill and decades of experience to craft this revelatory guidebook for our grief.”

“The World That the Shooter Left Us is poetry of conscience at its most crafted and compassionate. The title poem is an elegy for a beloved Latino lawyer, murdered by a white assailant over a parking space, that forces us to contemplate all we have lost in a society bristling with guns, rage, and bigotry. However, the title of another poem captures the essence of this eloquent collection: “The Only Way to Fight the Plague is Decency.” In the face of plague after plague—COVID-19, lethal police violence, kids in cages, the end of asylum, sexual exploitation, Trumpism—these poems show us a way out, a vision of transcendence through reclamation of our humanity. Cyrus Cassells demonstrates, through the resplendent decency of these poems, that the world the shooter left us is not only a world of death, but life, not only bullets, but poetry.”
—Martín Espada

"The exquisite poetry of Cyrus Cassells ignites on the level of the word, the phrase, the line, our very notion of what is possible in lyric poetry. This is a book to maintain our sanity in this world where shooters leave us with the violent legacies of the founding of this country and these Américas, where centuries later 'it’s always a firehosing summer.' In the wake of a 'lie-dispensing Sachem' 45th president, his enabled reckless vigilantes, and a global pandemic, Cassells offers wise and at times wry social commentary that is both gut-wrenching and uplifting, without 'blandishments,' without 'pious disguises.' The astonishing and bold leaps of imagination stick their landings on truth. I find myself saying 'yes' again and again to these calls for justice."
—Emmy Perez