Even the Dogs: A Novel (Paperback) 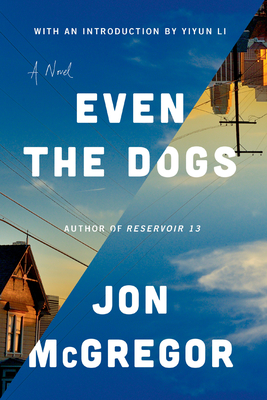 "A ferocious book, at once intense and alarmingly unsentimental" (James Wood, The New Yorker), this intimate exploration of life at the edges of society is littered with love, loss, despair, and a half–glimpse of redemption―now reissued with an introduction by Yiyun Li

On a cold, quiet day between Christmas and the New Year, a man's body is found in an abandoned apartment. His friends look on, but they're dead, too. Their bodies found in squats and sheds and alleyways across the city. Victims of heroin, they're ghosts in the shadows, a chorus keeping vigil as the hours pass, paying their own particular homage as their friend's body is taken away, examined, investigated, and cremated.

All of their stories are laid out piece by broken piece through a series of fractured narratives. We meet Robert, the deceased, the only alcoholic in a sprawling group of junkies; Danny, just back from uncomfortable holidays with family, who discovers the body; Laura, Robert's daughter, who stumbles into the drug addict's life when she moves in with her father after years apart; Heather, who has her own home for the first time since she was a teenager; Mike, the Falklands War vet; and all the others. Theirs are stories of lives fallen through the cracks, hopes flaring and dying, love overwhelmed by more immediate needs. These invisible people live in a parallel reality to most of us, out of reach of food and shelter. And in their sudden deaths, it becomes clear, they are treated with more respect than they ever were in their short lives.

Winner of the International Dublin Literary Award, Even the Dogs is a daring and humane exploration of homelessness and addiction from "a writer who will make a significant stamp on world literature. In fact, he already has" (Colum McCann, winner of the National Book Award).

Jon McGregor is the winner of the International Dublin Literary Award, the Costa Novel Award, the Betty Trask Prize, the Somerset Maugham Award, and the American Academy of Arts and Letters E. M. Forster Award, and has been long–listed three times for the Man Booker Prize, most recently in 2017 for Reservoir 13. He is professor of creative writing at the University of Nottingham, England, where he edits The Letters Page, a literary journal in letters.

Praise for Even the Dogs
Winner of the IMPAC Dublin Award

“As a novel about the consequences of addiction––particularly heroin addiction––'Even the Dogs' is harrowing. It details the physical, psychological, social and environmental damage, and portrays the all–consuming nature of the life...Using ghosts as narrators gives the book a haunting overtone. It lends resonance even to a simple observation like 'We see things differently now.' And it lets McGregor write with a gritty omniscience.” ―New York Times Book Review

“Unmissable ... McGregor’s prose is unflinching yet luminous.” —The Guardian

“It is a work of art as well as a subtle polemic, but above all his graceful, vivid prose conveys an eerie reality, existence as endured by the marginalised ... The narrative is cinematic, creating the illusion of a camera sweeping over the horrors ... Here is a brave, masterful novel that lives and weeps and, most emphatically, tells the stories behind those faces that no one seems to see.” —The Irish Times

“A ferocious book, at once intense and alarmingly unsentimental.” —James Wood, The New Yorker

“In his third novel, two–time Booker nominee McGregor . . . succeeds in paying homage to the dispossessed and the hopeless, who live and die on the margins of society.” ―Booklist

“Those who enjoyed Hubert Selby Jr.'s ""Requiem for a Dream"" will value the style and the subject matter.” ―Library Journal

“A rare combination of profound empathy and wonderful writing.” ―Mark Haddon, author of The Curious Incident of the Dog in the Night–Time

“'McGregor brings the underclass we instinctively turn away from into razor–sharp and sympathetic focus. A stone cold brilliant achievement'” —John Harvey, author of Body and Soul

“McGregor puts the reader into the minds of this interconnected web of people bent on various journeys of self–destruction. He constructs a powerful, disjointed narrative about dependency that is nearly impossible to put down, though it's not easy reading.” ―PopMatters