The US Antifascism Reader (Paperback) 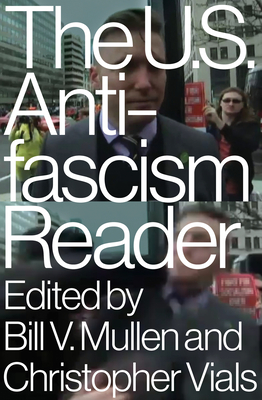 By Bill Mullen (Editor), Christopher Vials (Editor)
$29.95
Not in Our Store - Available to Order

How anti-fascism is as American as apple pie

Since the birth of fascism in the 1920s, well before the global renaissance of “white nationalism,” the United States has been home to its own distinct fascist movements, some of which decisively influenced the course of US history. Yet long before “antifa” became a household word in the United States, they were met, time and again, by an equally deep antifascist current. Many on the left are unaware that the United States has a rich antifascist tradition, because it has rarely been discussed as such, nor has it been accessible in one place. This reader reconstructs the history of US antifascism into the twenty-first century, showing how generations of writers, organizers, and fighters spoke to each other over time.

Spanning the 1930s to the present, this chronologically-arranged, primary source reader is made up of antifascist writings by Americans and by exiles in the US, some instantly recognizable, others long-forgotten. It also includes a sampling of influential writings from the US fascist, white nationalist, and proto-fascist traditions. Its contents, mostly written by people embedded in antifascist movements, include a number of pieces produced abroad that deeply influenced the US left. The collection thus places US antifascism in a global context.

Bill V. Mullen is Professor of American Studies at Purdue University. He is the author of James Baldwin: Living in Fire (forthcoming, Pluto Press); UnAmerican: W.E.B. Du Bois and the Century of World Revolution and Afro-Orientalism. He is co-editor, with Ashley Dawson, of Against Apartheid: The Case for Boycotting Israeli Universities. His articles have appeared in Social Text, African-American Review and American Quarterly. He is a member of the organizing collective of USACBI (US Campaign for the Academic and Cultural Boycott of Israel) and a founding member of the Campus Antifascist Network.

Chris Vials is an Associate Professor of English and Director of American Studies at the University of Connecticut-Storrs. He is the author of Haunted by Hitler: Liberals, the Left, and the Fight against Fascism in the United States (2014) as well as numerous pieces on fascism and antifascism in the United States. He has appeared on CBC radio, PBS, and NPR to discuss the history of American fascist and antifascist movements. He is also co-founder of the Neighbor Fund, a non-profit devoted to legal defense for undocumented immigrants in Connecticut.

“This is a crucial reader for our current political moment. It is a massive and rich archive, historicizing, theorizing, querying, and interrogating fascism in its many US varieties. This reader unearths and connects the anti-fascist responses in a plethora of sites—the Black Panthers and other anti-racist movements, LGBT pink triangle activists, and the Antifa. It will give you the knowledge to embolden yourself to resist and revolt.”
—Zillah Eisenstein, Anti-Racist Feminist Activist, Ithaca College

“Mullen and Vials cover an extraordinary range of sources—political, literary, sociological—from the fascists themselves, via liberal and business commentators, to the most committed of fascism’s opponents. This book is a treasure trove for anyone who wants to understand the tradition in which today’s antifascists stand.”
—David Renton, author of The New Authoritarians: Convergence on the Right

“In a remarkable feat of archival excavation, Bill Mullen and Christopher Vials have prepared a carefully compiled dossier to address fascism in the US in new and original ways. The result is a varied and vital collection—historically engaging and pressingly relevant—that tracks the arc of fascism and radical responses. The US Antifascism Reader brings the true stakes of this topic into focus. It’s a book I urge scholars and activists to obtain at once!”
—Alan Wald, University of Michigan

“This volume should be read by everyone who thinks they know what fascism is, and everyone who does not, for it provides a rich and indispensable set of materials to give depth and meaning to the word ‘fascism,’ precisely when we need a comprehensive and varied archive to inform anti-fascist struggles. If you want to know what fascism has been and can be, read this book. We ignore it at our peril.”
—David Palumbo-Liu, Stanford University