The Birds and the Beasts Were There: The Joys of Birdwatching and Wildlife Observation in California's Richest Habitat (Paperback) 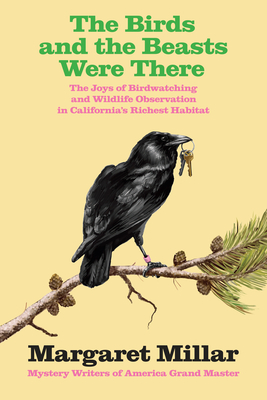 By Margaret Millar
$16.99
Recently On Our Shelves

Santa Barbara in the 1960s was home to two of the 20th century’s most important mystery writers, Margaret Millar and her husband, Ken (Ross Macdonald). It was also home to nearly 400 species of bird. This is the charming story of Ken and Maggie’s quest to see them all.

The addiction that is birdwatching comes to vivid life in Margaret Millar’s delightful memoir of her early days as a naturalist. Part autobiography and part birdwatcher’s journal, it is a moving elegy to a bygone place and time. Millar brings her meticulous plotting and no small amount of suspense to these charming stories of a belligerent brown towhee named Houdunit, a larcenous raven called Melanie, and a rat who carefully ferments his grapes before eating them, to name only a few.

Ornithology was a passion for both Ken and Maggie and they devoted their lives to it with the same keen sense of detail and, in the case of Margaret, storytelling vigor as they brought to their writing. In this book, the only memoir she wrote, Millar takes us on her journey from curious amateur to obsessive completionist. It is a phenomenon nearly any birding enthusiast will recognize.
Ken and Margaret Millar were founding members of the Santa Barbara Audubon Society.

Margaret Millar (1915-1994) was the author of 27 books and a masterful pioneer of psychological mysteries and thrillers. Born in Kitchener, Ontario, she spent most of her life in Santa Barbara, California, with her husband Ken Millar, who is better known by his nom de plume of Ross MacDonald. Her 1956 novel Beast in View won the Edgar Allan Poe Award for Best Novel. In 1965 Millar was the recipient of the Los Angeles Times Woman of the Year Award and in 1983 the Mystery Writers of America awarded her the Grand Master Award for Lifetime Achievement. Millar’s cutting wit and superb plotting have left her an enduring legacy as one of the most important crime writers of both her own and subsequent generations.

“One of the most original and vital voices in all of American crime fiction.”
—Laura Lippman

“I long ago changed my writing name to Ross Macdonald for obvious reasons.”
—Kenneth Millar (Ross Macdonald), in a letter to the Toronto Saturday Night newspaper

"Millar's mysteries are filled with clever twists, yet what makes them special is her surgical approach to her characters' inner lives. She's got an eagle eye for the juicy stuff lots of mystery writers still ignore—questions of class, status, sexual desire and the difficult position of women. This last was something she knew about firsthand. Millar's work was long overshadowed by that of her husband, detective novelist Ross Macdonald. In fact, her best novels — like 1955's Beast in View — have a ferocious edge that make him look rather tame."
—John Powers, NPR's Fresh Air

"One of the greatest this country has ever produced."
—The Globe and Mail

"A writer whose own work is every bit as psychologically bruising and critically acclaimed as that of her husband [Ross Macdonald], if not as well known. But [Syndicate Books] hopes to rectify that with Collected Millar."
—Kevin Burton Smith, Mystery Scene Magazine

“She has few peers, and no superior in the art of bamboozlement.”
—Julian Symons

“Written with such complete realization of every character that the most bitter antagonist of mystery fiction may be forced to acknowledge it as a work of art.”
—Anthony Boucher reviewing Beast in View for the New York Times

“Margaret Millar can build up the sensation of fear so strongly that at the end it literally hits you like a battering ram.”
—BBC

“Brilliantly superlative… One of the most impressive additions to mystery literature—and the word “literature” is used in its fullest sense.”
—San Francisco Chronicle

“In the whole of crime fiction’s distinguished sisterhood, there is no one quite like Margaret Millar.”
—The Guardian