A Good Time for the Truth: Race in Minnesota (Paperback) 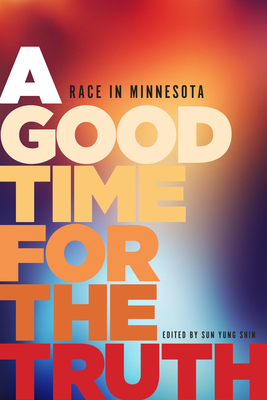 Essays that challenge, discomfort, disorient, galvanize, and inspire all of us to evolve now, for our shared future.

Although her first dream was to be a backup dancer for former hip-hop artist Heavy D, Taiyon J Coleman is a writer, educator and consultant, and her writing has appeared in numerous journals and anthologies. Currently completing her first novel, Chicago @ 15, Taiyon lives in Minneapolis with her family.

Heid E. Erdrich is Ojibwe, enrolled at Turtle Mountain. She is author of four collections of poetry and co-editor of Sister Nations: Native American Writers on Community. Her most recent book is Original Local: Indigenous Foods, Stories, and Recipes from the Upper Midwest. She mentors MFA students at Augsburg College.

Venessa Fuentes is from the Twin Cities. She is also from its arts, queer, and POC communities. Her writing has been anthologized, read at poetry picnics, shared at the dinner table, and turned into public art. Along with her son and her wife, Venessa claims the south side of Minneapolis as Home.<E/>

Shannon Gibney is a writer, educator, activist, and the author of See No Color, a young adult novel. Her writing has appeared in Al Jazeera America, The Crisis, Gawker, and other venues. A Bush Artist and McKnight Writing Fellow, she lives with her husband and children in Minneapolis.

David Lawrence Grant has written drama for the stage, film, and television, as well as fiction and memoir. He has written major reports on racial bias in the justice system for the Minnesota Supreme Court and on racial disparities in the health care system for the Minnesota legislature. He teaches screenwriting at Independent Filmmaker Project/Minnesota.

Carolyn Holbrook, recipient of a Minnesota State Arts Board Artist Initiative grant and the Minnesota Book Awards’ Kay Sexton Award, is the author of Ordinary People, Extraordinary Journeys and the founder of SASE: The Write Place (now merged with Intermedia Arts).

IBé is many things, and they all orbit around being father to his son and daughters. He lives in the Middle of the Atlantic, hoping his children make it to America (without leaving Africa behind). He writes poetry and passes it off as spoken word. Or maybe it is the other way around.<E/>

Andrea Jenkins, Intermedia Arts board chair and Bush Fellow, is a writer, performer, educator, and activist. A locally and nationally recognized poet, she has earned many awards, fellowships, and commissions. She is an oral historian at the Tretter Collection at the University of Minnesota Archives.

Robert Farid Karimi is an award-winning interdisciplinary playwright, experience designer and poet whose interactive performances feed audiences a mixed bowl of humor, pop culture, and personal history. A National Poetry Slam Champion, he has appeared in a variety of eclectic venues worldwide. His work has been published and recorded internationally.

JaeRan Kim is assistant professor at University of Washington Tacoma. JaeRan’s writing and scholarship focuses on the intersections of race, disability, gender, and kinship on vulnerable children and families.

Sherry Quan Lee approaches writing as a community resource and as culturally based art of an ordinary everyday practical aesthetic. Her most recent book, Love Imagined: a mixed race memoir, was a 2015 Minnesota Book Award finalist.

Bao Phi was born in Saigon and raised in the Phillips neighborhood of South Minneapolis. He has been a performance poet and has struggled to contribute to social justice movements since he was a teenager. He is grateful to the many artists and community organizers who have influenced him.

Rodrigo Sanchez-Chavarria is a writer and spoken word poet of Peruvian heritage involved with Palabristas, a Minnesota-based Latin@ poets collective. He is an MFA student at Hamline University and writes about fatherhood, the duality of two cultures in English, Spanglish and Spanish, and issues pertaining to his community.<E/>

Kao Kalia Yang is a Hmong American writer and the author of The Latehomecomer: A Hmong Family Memoir, published in 2008 by Coffee House Press, and The Song Poet, published in 2016 by Metropolitan Books.

Diane Wilson (Dakota) has published a memoir, Spirit Car: Journey to a Dakota Past, the 2012 One Minneapolis One Read selection, and a nonfiction book, Beloved Child: A Dakota Way of Life. Wilson is a 2013 Bush Foundation Fellow and Executive Director for Dream of Wild Health, a non-profit farm.

“Sun Yung Shin has brought together a collection of passionate literary warriors whose fierceness is equaled and at times surpassed only by their love of community, and of us, the people for whom they speak. The unburdening that takes place here is specific and yet representative. Either way it is heavy. Deep. You will not be able to read this book without changing. Minnesota will never be the same.”—Alexs Pate, author and president, Innocent Technologies, LLC


“This is the northern voice on race—multiple perspectives and divergent experiences, but a common call for change on one of the most pressing issues of our time. Brave and poignant, full of true grit and wisdom, A Good Time for the Truth is a compelling challenge to us all.”—Anton Treuer, author of Everything You Wanted to Know about Indians but Were Afraid to Ask


“A Good Time for the Truth evokes every emotion, from sudden bursts of laughter to soul-wrenching sadness at what could and should have been. The writers show how America has failed to deliver on its promise, while they simultaneously paint a vision of our capacity to thrive when the color of our skin is no longer the gatekeeper into the garden of American Dreams.”—Sia Her, executive director, Council on Asian Pacific Minnesotans


“These essays fuel our imaginations, encourage us to reflect on our values, and challenge our biases. The authors’ lived experiences strike a deep chord, resonating with current events and sounding a clarion call to advancing racial justice!”—Luz Maria Frias, attorney and race equity strategist


“What is a true Minnesotan? In the land still defined by Lake Wobegon, the Vikings, Snoopy, and Mary Tyler Moore, the ideas of who we are have still not caught up to the realities, not by a long shot. This book helps to narrow that gap.”—Wing Young Huie, author of Frogtown and The University Avenue Project