News of the Universe: Poems of Twofold Consciousness (Paperback) 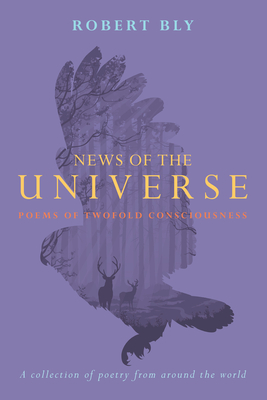 "One of Minnesota's finest poets, and certainly its finest poetry translator, herein whittles a world's worth of poetry into one beautiful, fine point. The overarching theme of twofold consciousness is perfectly suited to Bly's voice, thought, and career. I recommend this to anyone who's ever liked anything."

Acclaimed poet and translator Robert Bly here assembles a unique cross-cultural anthology that illuminates the idea of a larger-than-human consciousness operating in the universe. The book's 150 poems come from around the world and many eras: from the ecstatic Sufi poet Rumi to contemporary voices like Kenneth Rexroth, Denise Levertov, Charles Simic, and Mary Oliver. Brilliant introductory essays trace our shifting attitudes toward the natural world, from the "old position" of dominating or denigrating nature, to the growing sympathy expressed by the Romantics and American poets like Whitman and Dickinson. Bly's translations of Neruda, Rilke, and others, along with superb examples of non-Western verse such as Eskimo and Zuni songs, complete this important, provocative anthology.

Robert Bly is the author of more than thirty books of poetry, including Stealing Sugar from the Castle: Selected Poems (W. W. Norton, 2013); Talking into the Ear of a Donkey: Poems (2011); Reaching Out to the World: New and Selected Prose Poems (White Pine Press, 2009); My Sentence Was a Thousand Years of Joy (2006); The Night Abraham Called to the Stars (2001); Snowbanks North of the House (1999); Loving a Woman in Two Worlds (1987); This Body is Made of Camphor and Gopherwood (1977); and The Light Around the Body (1967), which won the National Book Award. As the editor of the magazine The Sixties (begun as The Fifties), Bly introduced many unknown European and South American poets to an American audience. He is also the editor of numerous collections including (Beacon Press, 2007); Mirabai: Ecstatic Poems (2004); The Soul Is Here for Its Own Joy: Sacred Poems from Many Cultures (1995); Leaping Poetry (1975); The Rag and Bone Shop of the Heart: Poems for Men (1992); News of the Universe (1980); and A Poetry Reading Against the Vietnam War (1967). Among his many books of translations are Lorca and Jiminez: Selected Poems (Beacon Press, 1997); Machado's Times Alone: Selected Poems (1983); The Kabir Book (1977); Friends, You Drank Some Darkness: Three Swedish Poets--Martinson, Ekeloef, and Transtromer (1975); and Neruda and Vallejo: Selected Poems (1971). Bly is also the author of a number of nonfiction books, including The Sibling Society (Addison-Wesley, 1996); The Spirit Boy and the Insatiable Soul (1994); Iron John: A Book about Men (1990); and Talking All Morning: Collected Conversations and Interviews (1980). His honors include Guggenheim, Rockefeller, and National Endowment for the Arts fellowships as well as The Robert Frost Medal from the Poetry Society of America. He lives on a farm in the western part of Minnesota with his wife and three children.