Beyond Repair: Living in a Fractured State (Paperback) 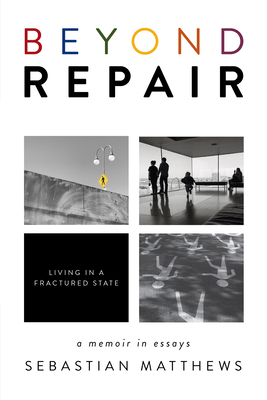 By Sebastian Matthews
$17.95
On Our Shelves Now

In 2011, my family was in a major car accident. We were hit head-on by a man in the throes of a heart attack. It took three years to recover from our injuries, and a couple more to deal with the aftereffects of trauma. When I finally returned to the world--as father and husband, friend and brother, writer and citizen--it became clear that our society was in its own traumatized state--reeling from the string of police shootings of unarmed African Americans, stunned by yet one more mass shooting. The people around me were displaying all the signs of PTSD--jumpiness, irritability, numbness--and, concordantly, my interactions out in daily life were becoming more dysfunctional, at times downright hostile. Us against them. Red vs. blue. Black vs. white. Rich vs. poor. That we were living in a progressive town inside a conservative county in the Mountain South only made things more volatile. I decided that if we were all living in a fractured society no longer recognizable, then it was up to me to re-engage in it. I would enter into encounters with people as conscious as possible of the potential divides and misunderstandings between us. I started with my neighborhood and town, then moved out into the counties around us, then traveled further out into the country. My goal: to connect.