Russian Roulette: The Inside Story of Putin's War on America and the Election of Donald Trump (Paperback) 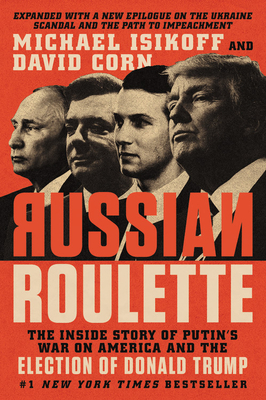 The incredible, harrowing account of how American democracy was hacked by Moscow as part of a covert operation to influence the U.S. election and help Donald Trump gain the presidency.

Russian Roulette is a story of political skullduggery unprecedented in American history. It weaves together tales of international intrigue, cyber espionage, and superpower rivalry. After U.S.-Russia relations soured, as Vladimir Putin moved to reassert Russian strength on the global stage, Moscow trained its best hackers and trolls on U.S. political targets and exploited WikiLeaks to disseminate information that could affect the 2016 election.

The Russians were wildly successful and the great break-in of 2016 was no "third-rate burglary." It was far more sophisticated and sinister -- a brazen act of political espionage designed to interfere with American democracy. At the end of the day, Trump, the candidate who pursued business deals in Russia, won. And millions of Americans were left wondering, what the hell happened? This story of high-tech spying and multiple political feuds is told against the backdrop of Trump's strange relationship with Putin and the curious ties between members of his inner circle -- including Paul Manafort and Michael Flynn -- and Russia.

Russian Roulette chronicles and explores this bizarre scandal, explains the stakes, and answers one of the biggest questions in American politics: How and why did a foreign government infiltrate the country's political process and gain influence in Washington?

Michael Isikoff is an investigative journalist who has worked for the Washington Post, Newsweek, and NBC News. He is the author of two New York Times bestsellers, Uncovering Clinton: A Reporter's Story and Hubris: The Inside Story of Spin, Scandal, and the Selling of the Iraq War (co-written with David Corn). He is a frequent guest on MSNBC, CNN, and other TV talk shows. Isikoff is currently the chief investigative correspondent for Yahoo! News.

David Corn is a veteran Washington journalist and political commentator. He is the Washington bureau chief for Mother Jones magazine and an analyst for MSNBC. He is the author of three New York Times bestsellers, including Showdown: The Inside Story of How Obama Battled the GOP to Set Up the 2012 Election and Hubris: The Inside Story of Spin, Scandal, and the Selling of the Iraq War (co-written with Michael Isikoff). He is also the author of the biography Blond Ghost: Ted Shackley and the CIA's Crusades and the novel Deep Background.

"[RUSSIAN ROULETTE] does an outstanding job of putting the Russia-Trump story into context, separating rumor from fact and adding new information...A smart, solid, even-handed book that future historians will use as a starting point."
—Booklist (starred review)

"Russian Roulette performs an important service in tracing how establishment Washington -- policymakers, intelligence chiefs, journalists -- came to understand that what Russia was (and reportedly is still) up to was not routine espionage...engaging, smart."—Los Angeles Times

"An eye-popping exposé of what amounts to a Cabinet appointment for Vladimir Putin in the Trump White House. If you're puzzled why the sitting president isn't going after the Russians for election tampering and other bad behavior, this is just the book to explain."—Kirkus

"This narrative by investigative reporters Michael Isikoff and David Corn leaves the reader nearly overwhelmed by evidence that Trump and Vladimir Putin have been striving to collaborate for years. Russian Roulette...makes many important contributions to this extraordinary story."—The Guardian

"With decades of experience from working the capital's cloakrooms and briefing rooms, [Michael Isikoff and David Corn] are deft practitioners of the modern craft of political book prose...Russian Roulette is a public service."—PopMatters