Degrees of Freedom: The Origins of Civil Rights in Minnesota, 1865–1912 (Paperback) 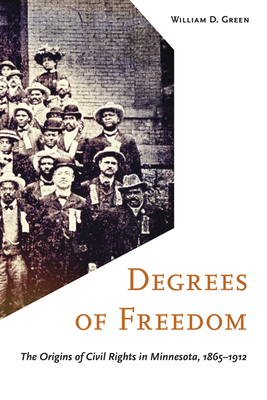 The true story, and the black citizens, behind the evolution of racial equality in Minnesota

He had just given a rousing speech to a packed assembly in St. Paul, but Frederick Douglass, confidant to the Great Emancipator and conscience of the Republican Party, was denied a hotel room because he was black. This was Minnesota in 1873, four years after the state had approved black suffrage—a state where “freedom” meant being unshackled from slavery but not social restrictions, where “equality” meant access to the ballot but not to a restaurant downtown.

Spanning the half-century after the Civil War, Degrees of Freedom draws a rare picture of black experience in a northern state and of the nature of black discontent and action within a predominantly white, ostensibly progressive society. William D. Green reveals little-known historical characters among the black men and women who moved to Minnesota following the Fifteenth Amendment; worked as farmhands and laborers; built communities (such as Pig’s Eye Landing, later renamed St. Paul), businesses, and a newspaper (the Western Appeal); and embodied the slow but inexorable advancement of race relations in the state over time. Within this absorbing, often surprising, narrative we meet “ordinary” citizens, like former slave and early settler Jim Thompson and black barbers catering to a white clientele, but also personages of national stature, such as Frederick Douglass, Booker T. Washington, and W. E. B. Du Bois, all of whom championed civil rights in Minnesota. And we see how, in a state where racial prejudice and oppression wore a liberal mask, black settlers and entrepreneurs, politicians, and activists maneuvered within a restricted political arena to bring about real and lasting change.

William D. Green, professor of history at Augsburg College, is the author of A Peculiar Imbalance: The Fall and Rise of Racial Equality in Minnesota, 1837-1869.

"Degrees of Freedom is a thoroughly researched exploration of black Minnesota and how the idea of ‘Minnesota Nice’ can be understood in terms of race relations and our state’s contribution to the civil rights movement. William D. Green offers us a meaningful look into how Minnesota managed to set precedents in antidiscrimination laws and provide progressive black and white leadership despite having a relatively small black population. He delves into the delicate balance of power between black activists and our progressive white society. This book will provide a deeper understanding of the challenges our community has faced and currently faces as we strive to close the achievement gap and move forward in creating true equal opportunity for all."—Archie Givens, president of the Givens Foundation for African American Literature

"This is a deeply researched and beautifully written account of a small, yet influential and unexamined, community of African American political activists. In addition to telling their story, it places their lives in the context of important changes in race relations, nation building, and party politics in the United States at the turn of the twentieth century."—William P. Jones, author of The March on Washington: Jobs, Freedom, and the Forgotten History of Civil Rights

"Accessible and illuminating, Green’s work is an indispensable tool for understanding the long-view perspective on where we have been, and how we might get to where we want to be."—Minnesota Monthly

"A meticulously researched examination of the involvement of African American men in Minnesota politics from the mid- nineteenth century until the early twentieth... Impressively detailed."—Middle West Review 2.2

"Degrees of Freedom provides a deeply probing and elegantly written reexamination of black and white lives intertwining through race and region."—Minnesota History