The Best of Artisan Bread in Five Minutes a Day: Favorite Recipes from BreadIn5 (Hardcover) 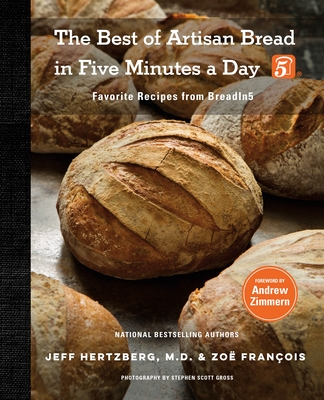 WITH A FOREWORD BY ANDREW ZIMMERN

"What Zoë and Jeff have done with the Artisan Bread in Five Minutes series is prove that the world’s easiest yeasted loaf, the most versatile bread dough recipe (even pizza!), can be taken in so many directions and have so many applications that it has created a series of hits." —From the Foreword by Andrew Zimmern

From Jeff Hertzberg, M.D., and Magnolia Network's Zoë François, the authors of the Artisan Bread in Five Minutes a Day series, comes a collection of all time favorite recipes and techniques.

With nearly one million copies of their books in print, Jeff Hertzberg and Zoë François have proven that people want to bake their own bread, so long as they can do it easily and quickly. But with five very different “Bread in Five” books to choose from, bakers have been asking: “Which one should I get if I want a little of everything: the best of European and American classics, whole-grain recipes, pizza and flatbread, gluten-free, sourdough, and loaves enriched with eggs and butter?”

Jeff Hertzberg, M.D. grew up eating great bread and pizza in New York City. He continues to teach the importance of moderation and variety in a healthy diet, and works as a medical director and consultant focusing on health-improvement programs. During his medical residency, he started a years-long quest to figure out how to make dough that was convenient enough to use every day. He turned an obsession with bread and pizza into a second career as a cookbook author.

ANDREW ZIMMERN is a chef, food writer, and teacher, as well as the host of the Travel Channel's hit show, Bizarre Foods with Andrew Zimmern and Bizarre Foods America. Andrew has been a featured guest on various popular national television shows such as NBC's Today Show, The Dr. Oz Show, Access Hollywood, Nightline, and E!'s The Soup. Born and raised in New York City, Andrew currently resides in Minnesota with his wife and son.

"The contents are superb, the recipes are absolute." —Andrew Zimmern, from the Foreword

"[In] this definitive guide to bread making...[both] veteran and novice bread bakers will find empowerment and inspiration." —Publishers Weekly

“Zoë François and Jeff Hertzberg have amazingly demystified the arcane and delightful world of artisan bread.” —Andrew Zimmern on Healthy Bread in Five Minutes a Day

"Soon the bread will be making itself... The crusty, full-flavored loaf that results may be the world's easiest yeast bread.” —The New York Times