Joined at the Hip: A History of Jazz in the Twin Cities (Hardcover) 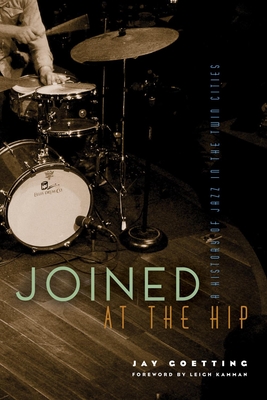 Jazz first churned its way into the Twin Cities on the Mississippi river excursion boats, which brought the likes of Jelly Roll Morton and Louis Armstrong to listeners on the levee—and it never left. When Paul Whiteman, Duke Ellington, Ella Fitzgerald, and other jazz greats toured the clubs and concert halls of the Cities, young musicians listened in the alleys outside, bought records, and learned more of this exciting new music. The local scene began to nurture players like Lester Young and Oscar Pettiford, who went on to bigger things, as well as those who remained close to home to ply their craft, like Rook Ganz, Percy Hughes, Doc Evans, and Dave Karr.

Using an invaluable set of interviews taped with jazz personalities that were broadcast by Dave Sletten and Kent Hazen in the 1990s and rare photographs spanning the entire era, author Jay Goetting recounts the lore and explores the social aspects of the story: racism, the gangster era, unionization and strip joints, and the ever-evolving music itself.

Jay Goetting, a journalist and bassist, has been a broadcaster, newspaper reporter, arts administrator, and county supervisor in Napa, California. He currently calls both Phoenix and San Francisco home. Leigh Kamman is the former host of Minnesota public radio’s popular long-running program The Jazz Image