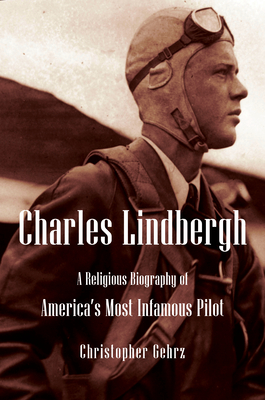 By Christopher Gehrz
$28.00
Email or call for price

The narrative surrounding Charles Lindbergh's life has been as varying and complex as the man himself. Once best known as an aviator--the first to complete a solo nonstop transatlantic flight--he has since become increasingly identified with his sympathies for white supremacy, eugenics, and the Nazi regime in Germany. Underexplored amid all this is Lindbergh's spiritual life. What beliefs drove the contradictory impulses of this twentieth-century icon?

An apostle of technological progress who encountered God in the wildernesses he sought to protect, an anti-Semitic opponent of US intervention in World War II who had a Jewish scripture inscribed on his gravestone, and a critic of Christianity who admired Christ, Lindbergh defies conventional categories. But spirituality undoubtedly mattered to him a great deal. Influenced by his wife, Anne Morrow Lindbergh--a self-described "lapsed Presbyterian" who longed to live "in grace"--and friends like Alexis Carrel (a Nobel Prize-winning surgeon, eugenicist, and Catholic mystic) and Jim Newton (an evangelical businessman), he spent much of his adult life reflecting on mortality, divinity, and metaphysics. In this short biography, Christopher Gehrz represents Lindbergh as he was, neither an adherent nor an atheist, a historical case study of an increasingly familiar contemporary phenomenon: the "spiritual but not religious."

For all his earnest curiosity, Lindbergh remained unwilling throughout his life to submit to any spiritual authority beyond himself and ultimately rejected the ordering influence of church, tradition, scripture, or creed. In the end, the man who flew solo across the Atlantic insisted on charting his own spiritual path, drawing on multiple sources in such a way that satisfied his spiritual hunger but left some of his cruelest convictions unchallenged.

Christopher Gehrz is professor of history at Bethel University in Saint Paul, Minnesota, where his innovative approach to teaching everything from church history to the world wars has earned him a Faculty Excellence Award. He is the author or editor of several books, including Faith and History: A Devotional and The Pietist Option: Hope for the Renewal of Christianity, and he blogs regularly about Christianity, history, and education at The Pietist Schoolman and The Anxious Bench.