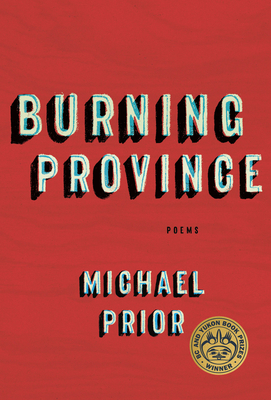 Acerbic, moving, and formally astonishing, Michael Prior's second collection explores the enduring impact of the Japanese internment upon his family legacy and his mixed-race identity.

Amid the record-breaking wildfires that scorched British Columbia in 2015 and 2017, the poems in this collection move seamlessly between geographical and psychological landscapes, grappling with cultural trauma and mapping out complex topographies of grief, love, and inheritance: those places in time marked by generational memory "when echo crosses echo."
Burning Province is an elegy for a home aflame and for grandparents who had a complex relationship to it--but it is also a vivid appreciation of mono no aware: the beauty and impermanence of all living things. "The fireflies stutter like an apology," Prior writes; "I would be lying to you / if I didn't admit I love them."

MICHAEL PRIOR is a writer and a teacher. His most recent poetry collection, Burning Province, won the Canada-Japan Literary Award and the Dorothy Livesay Poetry Prize and was shortlisted for the Raymond Souster Award. His first book of poems, Model Disciple, was named one of the best books of the year by the Canadian Broadcasting Corporation. His poems have appeared in Poetry, The New Republic, Narrative, Poetry Northwest, The Margins, PN Review, and the Academy of American Poets' Poem-a-Day series, among other publications. The recipient of fellowships from the New York Public Library's Cullman Center, the Jerome Foundation, and Hawthornden Literary Retreat, Prior holds graduate degrees from the University of Toronto and Cornell University. He divides his time between Saint Paul, M.N. and Vancouver, B.C.

Praise for Michael Prior and Burning Province:

“Extremely adept in his control of sound and image within free verse lyric form, Michael Prior leads the reader through shifts in location and time to contend with themes of history, identity, and belonging. Burning Province attempts to unravel memories of the poet’s grandparents’ time spent in a World War II internment camp for Japanese-Canadians, connect with a loved one who is drifting away cognitively at the end of life, and face questions of family and race when confronted by a border guard. Precise and stunning details captivate the reader and reveal connections that are unexpected, painful, and full of life.” —Raymond Souster Award, Jury Citation

“His new book, Burning Province, is an even more focused meditation on family history, inheritance, and the racist legacy of Canada’s wartime measures . . . Whether boasting a refashioned triolet ('New Year'), rhyming couplets ('Whether'), or bravura use of anaphora ('In Cloud Country'), the book is brimming with technical dexterity. Moreover, Burning Province proves itself to be the type of book that teaches readers how to parse it as they move through its complex web of allusions and images. When Prior ends 'Whether' with a 'burning city' that links to the next poem 'Province,' to approximate the title of the book, he exhibits a deftness that makes him stand out among his peers and establishes him as a poet for whom the particular is paramount.” —Jim Johnstone, Kenyon Review

“Michael Prior’s ferociously beautiful Burning Province is driven by several narratives—some personal, some cultural, some geographic . . . Writers know that it is one thing to have an ecstatic or confusing experience, but quite another thing to create a meaningful version of such a state for the reader. That Prior is able to recover meaning from nightmare, silence, half-stories, and dislocation is reason enough to read this ravishing collection.” —Lisa Russ Spaar, Los Angeles Review of Books

“Prior crafts lovely, elegant verse. This collection moves from strength to strength, evoking the careful folds of origami one moment and the fall of light on water another, and grounding all this beauty in closely observed renderings of B.C. locales like Steveston and Minoru Park. [T]his lovely book invites us to travel with [Prior] to latitudes only a poet can find.” —Tom Sandborn, Vancouver Sun

“In the intimate and spellbinding world of Burning Province, there are many ways the past is reborn or transformed into the present. . . . Prior highlights the complexities of relationships to others and the self with a discerning and illuminating eye. Indeed, it is this illuminating gaze that makes Burning Province such a brilliant collection. The poems within are as searing and unforgettable as the fireflies that appear again and again throughout the book . . . a transformative and transcendent experience.” —Wendy Chen, Poetry Northwest

“Prior telescopes the distance between the personal, the political, and geographic, his language roving between intimate observations of the self and the world--both natural and manufactured--beyond. [T]he musicality of the language, typified by internal rhyme and assonance, is sophisticated and pleasingly euphonic: 'fledglings / in our chests bear no desire to leave the nest, / or rot to barbed wire'.. . . [T]he poetry in Burning Province is brief but densely packed, finely tuned, and aware.” —Steven Beattie, Quill & Quire

“A magnificent collection. In a voice tenderly apocalyptic, Burning Province transmutes inherited stories and silences around the internment of Japanese-Canadians at the outbreak of World War II into a sublime testimony of resilience. These poems enact with technical conviction Simone Weil’s dictum, ‘no grandeur except in gentleness.’ Michael Prior’s fierce gentleness is an exciting and exacting talent.” —Ishion Hutchinson, author of House of Lords and Commons

“‘When the land is gone,/meet me where it was,’ writes Michael Prior in this superb second collection, where the poet brings the terrains of both erased histories and erased wilderness to life with startling force and awe. Prior’s skill as a poet lies in his ability to both shape into being and rupture existing ideologies of the land and what it shelters—his poems upend preconceived notions of the pastoral. A highway built by a great-grandfather during internment, cygnets, fires, dreams of Kyushu, cardinals preparing for storms—each detail is rendered exquisitely. Fresh, crisp, and alive, this book is essential reading—if not for the breathless beauty of its lines, then for its historical revelations. Prior ensures that the stories of those loved ones never vanish.” —Sally Wen Mao, author of Oculus

"Memory is a  burning province in this noctilucent book that sings the night folds of history—its forgotten ragments and repressed accounts. Passion runs through the poems like a subversive  river. Portraits smolder with residual depth; the negative space where 'salt and silver nitrate / scribe light’s dictation on the page . . .' The conundrum of Theseus’s ship becomes a trope for disruptions of identity and cultural heritage. When Michael Prior considers the internment of Japanese-Americans during World War II, his sources are primary and visceral. The poems’ metabolism—the linguistic synergy that imbues language with life—offers inexhaustible discoveries in lines sharp as incisions, riveting in their precision. Sensual pastorals, gorgeously-thought eclogues, create a stereophonic alliance of political consciousness with lyric imagination. 'When the land is gone, / meet me where it was.' Haunted by the exigencies of humans and planet, Prior’s elegiac lyric narratives are as beautiful as they are necessary. His poems will entice you to see and feel the world freshly, the greatest gift literature can bestow." —Alice Fulton, author of Barely Composed