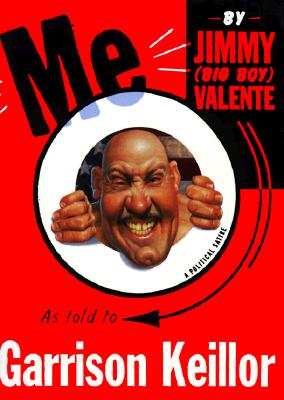 By Garrison Keillor
$15.95
Email or call for price

Abandoned by his mother at birth, little Clifford Oxnard grows up in south Minneapolis, tormented by bullies and chased by big dogs until an encounter with the Wild Man of Borneo and a mail-order body-building course changed his life. Transformed into the six-foot-four 300-pound he-man Jimmy (Big Boy) Valente, he enlists in the U.S. Navy's elite Walrus program and is trained to use explosives, speak in code, navigate unfamiliar terrain, and know the darkness of the human heart -- and is sent to Vietnam.

In Vietnam, his Walrus unit vanquishes hordes of Viet Cong, fighting off tanks and artillery and even the Lost Squadron of the Rising Sun (the last surviving Japanese unit from World War II), assisted by Jimmy's defector buddy, Victor Charlie, better known as The Rodent.

Returning to the States, Jimmy finds his way to Alaska, "man's country, " where, after a few wrong turns, he joins a professional wrestling troupe, replacing the Duke of Dubuque and the Dauphin Louie de Louie, embarking on a career that takes him to the pinnacle of International World Wrestling, bringing him fame and fortune and introducing him to his hero, Arnold Schwarzenegger. But it also brings him into conflict with a dangerous death-dealing foe who stalks him relentlessly.

Raw, Explosive, Steamy, marked by searing action and bold thought, Me stands head, shoulders, and torso above Dan Quayle's Standing Erect, Newt Gingrich's Things I Finally Figured Out, and Colin Powell's My Trips Around the U.S.