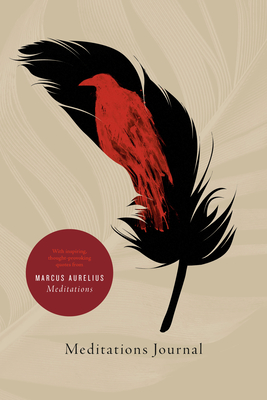 Drawing from the iconic Stoic text Meditations by Marcus Aurelius, Meditations Journal invites the millions of readers who have learned from him to deepen their understanding of his philosophy and reflect on how to better their lives.

“It’s silly to try to escape other people’s faults. They are inescapable. Just try to escape your own.”—Marcus Aurelius, Meditations

Marcus Aurelius wrote this in his journal almost 2000 years ago—and he might have written it this morning. He was Emperor of Rome in A.D. 161, a statesman, a philosopher, and a constant, thoughtful journaler.  He was also one of the first Stoics. Stoicism is the original self-help philosophy, one that has stayed relevant for 2000 years.

Whether or not you've read Meditations, Meditations Journal offers pithy, inspiring comments drawn from the core text that give readers simple but profound ways to take control of their lives, identify obstructions, and above all, live a good life.

Gregory Hays is associate professor of classics at the University of Virginia.

Marcus Aelius Aurelius Antoninus (121-180 CE) was adopted by the emperor Antoninus Pius and succeeded him in 161, (as joint emperor with adoptive brother Lucius Verus). The last of the so-called Five Good Emperors, he ruled alone from 169. Presiding over a changing Rome, he spent much of his reign in putting down various rebellions. Today, he is best-know for his Meditations, a series of reflections, strongly influenced by Epictetus, which cemented his place as one of the greatest Stoic Philosophers. He died in 180 and was succeed by his natural son, thus ending the period of the adoptive emperors.