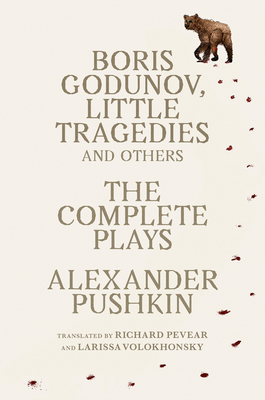 The award-winning translators bring us the complete plays of the most acclaimed Russian writer of the Romantic era.

Known as the father of Russian literature, Alexander Pushkin was celebrated for his dramas as well as his poetry and stories. His most famous play is Boris Godunov (later adapted into a popular opera by Mussorgsky), a tale of ambition and murder centered on the sixteenth-century Tsar who preceded the Romanovs. Pushkin was inspired by the example of Shakespeare to create this panoramic drama, with its richly varied cast of characters and artful blend of comic and tragic scenes.

Pushkin’s shorter forays into verse drama include The Water Nymph, A Scene from Faust, and the four brief plays known as the Little Tragedies: The Miserly Knight, set in medieval France; Mozart and Salieri, which inspired the popular film Amadeus; The Stone Guest, a tale of Don Juan in Madrid; and A Feast in a Time of Plague, in which a group of revelers defy quarantine in plague-ridden London. These new translations of the complete plays, from the award-winning translators Richard Pevear and Larissa Volokhonsky, freshly reveal the range of Pushkin’s enduring artistry.

ALEXANDER PUSHKIN (1799–1837) was a poet, playwright, and novelist who achieved literary fame before he was twenty. He was born into the Russian nobility and his great-grandfather was the African-born general Abram Petrovich Gannibal. Pushkin’s radical politics brought him censorship and periods of banishment, but he eventually married a society beauty and became part of court life. Notoriously touchy about his honor, he died at age thirty-seven in a duel with his wife’s alleged lover.

About the Translators: RICHARD PEVEAR and LARISSA VOLOKHONSKY have translated works by Tolstoy, Dostoevsky, Chekhov, Gogol, Bulgakov, Leskov, and Pasternak. They were twice awarded the PEN/Book-of-the-Month Club Translation Prize (for Dostoevsky’s The Brothers Karamazov and Tolstoy’s Anna Karenina). They are married and live in France.