A Traveler at the Gates of Wisdom: A Novel (Hardcover) 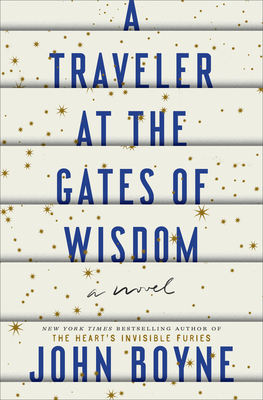 Here’s a thought: over the millennia, the world has changed constantly by exploration, new inventions, and ideas, but Mankind’s human emotions have not. We still experience and react to joy, grief, anger, fear, desire, rage. Humankind has always and continues to produce good angels, bad angels, good sons, prodigal sons, artists, leaders, warriors and so it continues. In this compelling novel, Boyne leads the reader through two thousand plus years of humankind beginning in 1 A.D. with the slaughter of infant boys by Herod and ending in 2080 on space colonies as Earth reaches its final days. Over 50 incarnations of stories evolve and intertwine over time in family after family, some historical. The world changes around them but destinies remain the same.  It is the story of us. It is Boyne at his imaginative thought-provoking best.

From the bestselling author of A Ladder to the Sky—“a darkly funny novel that races like a beating heart” (People)—comes a new novel that plays out across all of human history: a story as precise as it is unlimited.

This story starts with a family. For now, it is a father and a mother with two sons, one with his father’s violence in his blood, one with his mother’s artistry. One leaves. One stays. They will be joined by others whose deeds will determine their fate. It is a beginning.

Their stories will intertwine and evolve over the course of two thousand years. They will meet again and again at different times and in different places. From Palestine at the dawn of the first millennium and journeying across fifty countries to a life among the stars in the third, the world will change around them, but their destinies remain the same. It must play out as foretold.

From the award-winning author of The Heart’s Invisible Furies comes A Traveler at the Gates of Wisdom, an epic tale of humanity. The story of all of us, stretching across two millennia. Imaginative, unique, heartbreaking, this is John Boyne at his most creative and compelling.

John Boyne is the author of twelve novels for adults, six for younger readers, and a collection of short stories. In his native Ireland, he has won three Irish Book Awards and been shortlisted on thirteen separate occasions. He has also won or been shortlisted for a host of international literary awards, including a Stonewall Honor Award and a Lambda Literary Award. A regular participant in international literary festivals, he has also been a member of the jury for the International IMPAC Dublin Literary Award and the Costa Book Award, and in 2015 he chaired the jury for the Scotiabank Giller Prize. His novels have been published in over fifty languages.

Praise for The Heart’s Invisible Furies

“By turns whimsical and heartbreaking, Boyne’s sprawling novel treads Dickensian territory across seven decades of Irish history, ending with a redemption for both a country and a native son.”—People

“Bleak, bittersweet, and Irish to the bone . . . Explore[s] the relationship between Catholicism and patriarchy in midcentury Ireland and beyond.”—O: The Oprah Magazine

“A picaresque, lolloping odyssey for the individual characters and for the nation that confines them . . . The book blazes with anger as it commemorates lives wrecked by social contempt and self‑loathing. . . . A substantial achievement.”—The Guardian

Praise for A Ladder to the Sky

“A satire of writerly ambition wrapped in a psychological thriller . . . an homage to Patricia Highsmith, Oscar Wilde and Edgar Allan Poe, but its execution is entirely Boyne’s own.”—The Washington Post

“Boyne’s mastery of perspective, last seen in The Heart’s Invisible Furies, works beautifully here. . . . So dark it seems almost impossible to enjoy reading A Ladder to the Sky as much as you definitely will enjoy reading it.”—NPR

“A darkly funny novel that races like a beating heart.”—People