Imagine a City: A Pilot's Journey Across the Urban World (Hardcover) 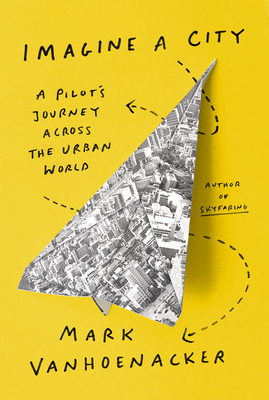 By Mark Vanhoenacker
$30.00
Email or call for price

This love letter to the cities of the world—from the airline pilot–author of Skyfaring—is "a journey around both the author's mind and the planet's great cities that leaves us energized, open to new experiences and ready to return more hopefully to our lives" (Alain de Botton, author of The Art of Travel).

In his small New England hometown, Mark Vanhoenacker spent his childhood dreaming of elsewhere— of the distant, real cities he found on the illuminated globe in his bedroom, and of one perfect metropolis that existed only in his imagination. These cities were the sources of endless comfort and escape, and of a lasting fascination. Streets unspooled, towers shone, and anonymous crowds bustled in the places where Mark hoped he could someday be anyone—perhaps even himself.

Now, as a commercial airline pilot, Mark has spent nearly two decades crossing the skies of our planet and touching down in dozens of the storied cities he imagined as a child. He experiences these destinations during brief stays that he repeats month after month and year after year, giving him an unconventional and uniquely vivid perspective on the places that form our urban world.

In this intimate yet expansive work that weaves travelogue with memoir, Mark celebrates the cities he has come to know and to love, through the lens of the hometown his heart has never quite left. As he explores emblematic facets of each city’s identity— the road signs of Los Angeles, the old gates of Jeddah, the snowy streets of Sapporo—he shows us with warmth and fresh eyes the extraordinary places that billions of us call home.

MARK VANHOENACKER is a commercial airline pilot and writer. The author of the international best seller Skyfaring: A Journey with a Pilot and How to Land a Plane, he is also a regular contributor to The New York Times and a columnist for the Financial Times. Born in Pittsfield, Massachusetts, he trained as a historian and worked in business before starting his flight training in Britain in 2001. He now flies the Boeing 787 Dreamliner from London to cities around the world.

"There’ve been plenty of books about cabin attendants’ adventures as part of a globe-trotting sorority bringing the mile-high club down to earth; Imagine a City is a much more intimate and thoughtful work from a man who, seeing ‘the small metal plate on which an arrow indicates qibla, the direction of Mecca’ in [a] hotel room in Abu Dhabi, uses it ‘to estimate the initial direction of the great circle route’ that will take him and his big bird back to London as the light comes up again. . . . What makes this captain of the heavens so appealing is a kind of all-American innocence that helps him savor ‘the palmistry of lit streets’ in Salt Lake City, seen from 38,000 feet above, as eagerly as he devours the poets of Delhi when touching down for 48 hours. Linking the places he flies between through snow, or gates, or the color blue, Vanhoenacker . . . seems to have a near-bottomless appetite for fresh sights and guidebook curiosities.” —Pico Iyer, Air Mail

“Mark Vanhoenacker is a beautiful lyrical writer who uses his experience as a pilot to bring us constantly in touch with the transcendent and the other worldly. Imagine a City is a journey around both the author's mind and the planet's great cities that leaves us energised, open to new experiences and ready to return more hopefully to our lives.” —Alain de Botton, author of The Art of Travel

“An inviting new volume that gives new meaning to the notion of the view from 42,000 feet. . . . Who knew that in command of one of humankind’s most remarkable modes of transport was a historian of humankind’s ancient history? . . . At the keyboard, Vanhoenacker has danced, and on his pages there is tumbling mirth indeed. . . . Along the way—in mid-flight, you might say—Vanhoenacker offers a lyrical look at what life is like behind those bolted cabin doors.” —David M. Shribman, The Boston Globe

“A love song to cities the world over. . . . Visits to the great cities, especially in the company of one who loves them as Mr. Vanhoenacker does, can have a way of inspiring us and urging us to follow him and go there too. The author sees these places in their entirety—from great heights and from close by—as he strolls down their streets taking in their views, sounds and smells. He writes as someone who, from a very early age—looking at a metal globe—wanted to explore the world, to get to know it all, to touch it, so to speak, everywhere. I share that urge. Many of us still do. And for those of us who do, Imagine a City will hold us in a warm, welcome embrace.” —Shlomo Angel, The Wall Street Journal

“If you’re not tussling for legroom and overhead bin space, it’s easier to remember that flying is a spectacular way to see our planet. Belgian American pilot Mark Vanhoenacker blends privileged cockpit views with travelogue and memoir in his new book, which reads as a love letter to the cities he’s returned to again and again. . . . As in a previous book, Skyfaring: A Journey with a Pilot, Vanhoenacker captivates when describing the silent beauty of a world glimpsed from above.” —The Washington Post

"Combines the god’s eye view of them with street-by-street detail. The book will enchant and even move anyone who feared in recent years for the future of both travel and urbanism." —Financial Times, "Best summer books of 2022"

“Even if you're not yet ready to brave crowded airports and long lines at TSA, you can still visit some of the world's great cities from the comfort of your armchair, with Mark Vanhoenacker as your tour guide. . . . Vanhoenacker is a sure-handed navigator, filling in . . . gaps with history, poetry, and lots of local color.” —NPR

"Vanhoenacker is exceptionally well travelled, and an exceptionally curious and widely read observer. . . . He doesn’t waste an hour, and with every return his engagement with each city deepens." —The Times Literary Supplement

“[A] beguiling tour of cities both real and imagined. . . . Vanhoenacker is a collector of sumptuous details. . . . Philosophically rich without being ponderous, belonging on the same shelf as books by Saint-Exupéry, Markham, and Langewiesche, Vanhoenacker’s book is unfailingly interesting, full of empathetic details on faraway places and lives. It’s an absolute pleasure for any world citizen and a trove for any traveler. A sparkling addition to the literature of flight.” —Kirkus Reviews (starred review)

"A memoir wrapped within a scholarly travel book. . . . Dreamy and erudite. . . . A most likeable, warm-hearted narrator with an original world view.” —The Times (UK)

“A century ago, at the dawn of flight, people imagined that writers would want to become pilots, and vice versa, because of the revelations that come with seeing the Earth from above. Mark Vanhoenacker's elegant, engrossing book shows the power of these twinned perspectives, from the skies and up close at ground level. Readers who have not yet traveled with him at the controls of a 787 will be grateful to accompany him on the journeys in these pages.” —James Fallows, coauthor of Our Towns

“Mark Vanhoenacker is a long-haul commercial pilot, and his 787 Dreamliner—a very apt name—takes him to all the cities he dreamed of as a boy in smalltown America (and many more). His perspective--from the cockpit, on the ground, and through the lens of retrospection—defies easy comparison: Imagine a coming-of-age memoir and shrewdly picaresque travelogue told by Jules Verne, E,B. White, and Jan Morris rolled into one. There is a moment we all know, head angled against an airplane window at night, when you can see both yourself and what's below. Imagine a City lays claim to that moment. Vanhoenacker's curiosity about the planet and his honesty about himself will leave a permanent mark.” —Cullen Murphy, editor at large of The Atlantic

“An utterly remarkable and original travel book. Like Jan Morris and Pico Iyer, Vanhoenacker weaves memoir and travelogue, using his unusual perch as a pilot to take us on an incredible journey to dozens of cities around the world. Like Italo Calvino, he somehow weaves it all into one, a painfully beautiful cubist city of memory and dreams that rises out of his warm and lyrical prose.” —Andrew Blum, author of Tubes and The Weather Machine

“If the child is the father of the man, then ‘the hometown is like a mother tongue.’ Mark Vanhoenacker takes us on a journey to major metropolises all over the earth on a quest to find the hidden personal geographies revealed in faraway and unfamiliar parks, cathedrals, marketplaces or seashores. We all carry an invisible city around with us wherever we go, a town of the psyche we’re always trying to re-enter or flee. Vanhoenacker regards the lights from 40,000 feet up, and then lands the plane to meet the denizens of his own interior city eye-to-eye. A tour de force of descriptive power and honesty; I can think of no other book like this one.” —Tom Zoellner, winner of the 2020 National Book Critics Circle Award for Nonfiction

“Most of us look at cities from the ground up. But, Mark Vanhoenacker, a pilot, looks at them from above. And his journeys enable him to drop in and visit and revisit cities across the world. His book, Imagine a City provides a unique and much-needed perspective of the cities and the urban world we live in.” —Richard Florida, author of The Rise of the Creative Class

"An enriching memoir of how a sensitive boy’s yearning for escape and acceptance found its fulfilment in the life of an airline pilot . . . A touching survey of human dreams and endeavours and a hymn to the quiet pleasures of returning, in the flesh or in memory, to the intimate geography of one’s hometown." —Patrick Gale, author of Mother’s Boy

"Refreshingly personal and moving . . . This absorbing modern twist on the age-old story of flying the nest, yet yearning for home, will transport you around the globe and back again without leaving your seat." —Mark Ovenden, author of Metro Maps of the World