The Biggest Bluff: How I Learned to Pay Attention, Master Myself, and Win (Hardcover) 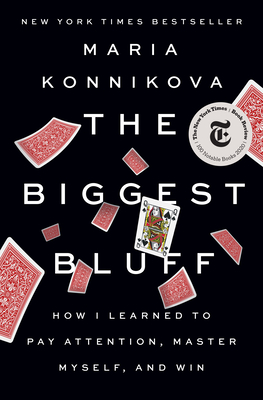 By Maria Konnikova
$28.00
On Our Shelves Now

“The tale of how Konnikova followed a story about poker players and wound up becoming a story herself will have you riveted, first as you learn about her big winnings, and then as she conveys the lessons she learned both about human nature and herself.” —The Washington Post

It's true that Maria Konnikova had never actually played poker before and didn't even know the rules when she approached Erik Seidel, Poker Hall of Fame inductee and winner of tens of millions of dollars in earnings, and convinced him to be her mentor. But she knew her man: a famously thoughtful and broad-minded player, he was intrigued by her pitch that she wasn't interested in making money so much as learning about life. She had faced a stretch of personal bad luck, and her reflections on the role of chance had led her to a giant of game theory, who pointed her to poker as the ultimate master class in learning to distinguish between what can be controlled and what can't. And she certainly brought something to the table, including a Ph.D. in psychology and an acclaimed and growing body of work on human behavior and how to hack it. So Seidel was in, and soon she was down the rabbit hole with him, into the wild, fiercely competitive, overwhelmingly masculine world of high-stakes Texas Hold'em, their initial end point the following year's World Series of Poker.

But then something extraordinary happened. Under Seidel's guidance, Konnikova did have many epiphanies about life that derived from her new pursuit, including how to better read, not just her opponents but far more importantly herself; how to identify what tilted her into an emotional state that got in the way of good decisions; and how to get to a place where she could accept luck for what it was, and what it wasn't. But she also began to win. And win. In a little over a year, she began making earnest money from tournaments, ultimately totaling hundreds of thousands of dollars.  She won a major title, got a sponsor, and got used to being on television, and to headlines like "How one writer's book deal turned her into a professional poker player." She even learned to like Las Vegas.

But in the end, Maria Konnikova is a writer and student of human behavior, and ultimately the point was to render her incredible journey into a container for its invaluable lessons. The biggest bluff of all, she learned, is that skill is enough. Bad cards will come our way, but keeping our focus on how we play them and not on the outcome will keep us moving through many a dark patch, until the luck once again breaks our way.

Maria Konnikova is the author of Mastermind and The Confidence Game. She is a regular contributing writer for The New Yorker, and has written for The Atlantic, The New York Times, Slate, The New Republic, The Paris Review, The Wall Street Journal, Salon, The Boston Globe,  Scientific American, Wired, and Smithsonian, among many other publications. Her writing has won numerous awards, including the 2019 Excellence in Science Journalism Award from the Society of Personality and Social Psychology. While researching The Biggest Bluff, Maria became an international poker champion and the winner of over $300,000 in tournament earnings. Maria also hosts the podcast The Grift from Panoply Media and is currently a visiting fellow at NYU’s School of Journalism. Her podcasting work earned her a National Magazine Award nomination in 2019. Maria graduated from Harvard University and received her PhD in Psychology from Columbia University.

“Fascinating. . . . [The Biggest Bluff] will inspire readers as much as it entertains them.” —The Washington Post

“Fascinating. . . . Konnikova is like your smart friend who instantly contextualizes everything by sharing the latest data and sharpest insight, whom you come to quote too often. . . . Konnikova keeps the lines so clean and even, so steady and unshowy that she might be the Charlie Watts of prose: While the backbeat never ceases and the narrative propels along, it’s her curiosity that proliferates. In fact, one of the biggest bluffs of The Biggest Bluff may be that Konnikova hasn’t written a book about her success with cards and chips exactly, but bet the house on the power of her mind to synthesize big philosophical ideas and psychological insights at a time when we, too, find ourselves questioning our fortunes, hoping to master our fates and playing much bigger odds than ever before.” —New York Times Book Review

“There has never been a more pressing need for digestible and coherent literature on rational decision-making. Enter The Biggest Bluff, psychologist Maria Konnikova’s depiction of her journey into professional poker. What at first seems a light-hearted story about a curious academic dipping her toe into shark-infested waters delivers a crucial lesson in how to thrive in an increasingly misleading world. . . . As someone who has read almost every piece of literature on poker, I can say that The Biggest Bluff is the best depiction yet of the game I love, and the invaluable thinking skills it teaches. . . . Konnikova’s is an uplifting zero-to-hero journey that will raise a smile in these trying times.” —Nature

“The Biggest Bluff is a great read if you play poker. But it's also a great read for those, like me, who don't play poker. For us, the game provides the backdrop for a fascinating look at human nature, at attention and focus, at game theory (applied much more broadly than just to games), and at making better decisions. And how to better deal with the outcomes of those decisions -- and not just learn, but keep moving forward. . . . [A] must-read for most entrepreneurs.” —Inc.

“The tale of how Konnikova followed a story about poker players and wound up becoming a story herself will have you riveted, first as you learn about her big winnings, and then as she conveys the lessons she learned both about human nature and herself.” —The Washington Post

“The Biggest Bluff is a brilliant book mostly because Konnikova is a brilliant writer, but also because she is a brilliant observer of the weird world she has immersed herself into . . . The most enthralling parts of the book are when she takes the reader inside the cockpit and talks through some of the high-stakes plays she finds herself involved in.” —The Daily Telegraph

“The Biggest Bluff feels particularly timely in the current pandemic. As governments design policies based on limited data, and individuals are forced to grapple with the probabilities of contagion – we could all do with the greater understanding of uncertainty, and how to think about it under pressure, that comes with the game.” —BBC

“Konnikova seeks to explore the fine line between skill and luck, 'to learn what I could control and what I couldn’t.' If ever there were a game to illustrate those categories, poker is it. . . . She traveled to all the right places—Macau, Las Vegas, Monte Carlo—and even made some money along the way. The payoffs for readers are more cerebral, including Konnikova’s observation that we think we have much more control over our lives than we really do. . . . A smart and subtle delight—highly recommended for fans of cards and brain-hacking alike.” —Kirkus (starred review)

“I absolutely love this book. The story is fantastically gripping, and offers lessons about decision-making, luck, risk—and, most important, how to play at life like a cool-headed pro. This is one of my favorite books of the year.” —Charles Duhigg, author of bestsellers The Power of Habit and Smarter Faster Better

“The Biggest Bluff is an exhilarating and often hilarious personal journey. What’s most exciting, though, is the probing sociological analysis by the brilliant and eternally-curious Maria Konnikova.” —Jesse Eisenberg, author of Bream Gives Me Hiccups

“The narrative is so gripping that you might get halfway through The Biggest Bluff before you even notice that you’re getting a master class in learning, focus, and decision-making. I tore through it in two sittings, and haven’t stopped thinking about it since.” —David Epstein, author of Range

“One of the most extraordinary outcomes of any experiment in participatory journalism. This is a book not just about the game of poker, but about the meaning of luck, the science of skill, and the psychology of outsmarting your competitors.” —Joshua Foer, author of Moonwalking with Einstein and founder of Atlas Obscura

“This book probably won’t turn you into an international poker champ overnight, and it definitely won’t make you as smart as Maria Konnikova. But it will do something just as valuable: it will teach you to think more like her. It’s rare enough to find a memoir this transfixing or a behavioral science book this insightful. To have them combined in one place—by a psychologist who mastered one of the most competitive games on earth—is a real treat.” —Adam Grant, New York Times bestselling author of Originals and Give and Take, and host of the chart-topping TED podcast WorkLife

“Maria Konnikova has penned a page-turning memoir about going from journalist-curious- about-poker to professional gambler raking in hundreds of thousands. The fascinating portrait of her Buddha, Erik Seidel--the ultimate poker studmuffin & all around Renaissance man--puts this whole tale on a par with the best nonfiction by that czar of the form John McPhee. A must read!” —Mary Karr, author Liars' Club, Lit, and The Art of Memoir

“I love it. Not only did The Biggest Bluff lead me into a complex and charismatic new world, it made me think about my own life and my own self-deceptions about control—and taught me to pay more attention to my own opponents, mine being of the tennis sort. The narrative is deftly crafted, and the journey—the self-examination, the oddball characters, the awful misogyny, the Aggros, the notion of tilt—accumulates in a seamless and satisfying way. I read this in what for me was record time.” —Erik Larson, #1 New York Times bestselling author of The Splendid and the Vile

“The Biggest Bluff is a flat out classic. It’s a ripping good story—with an underdog heroine, a Yoda-like mentor, and a cast of wild characters. It’s a sophisticated meditation on the relative importance of deep skill and dumb luck. And it’s a primer on how to pay attention, think objectively, and make better decisions. Reading this book is like drawing a straight flush. You won’t believe your good fortune—and you’ll remember it for a long, long time.” —Daniel H. Pink, #1 New York Times bestselling author of When, Drive, and To Sell is Human

“We’re all searching for greater self-knowledge—and Maria Konnikova found it through poker. She set out to make herself a champion, and along the way, she learned far more than the game. In lessons we can use ourselves, poker taught her greater emotional and physical regulation, tolerance for risk and uncertainty, more intelligent decision-making, a grasp of the intertwined roles of chance and skill, and sheer confidence. As she explains, ‘This book isn’t about how to play poker. It’s about how to play the world.’” —Gretchen Rubin, author of The Happiness Project and Better Than Before

“There are a lot of great books about psychology. And there are even some great books about poker. There isn’t any book like The Biggest Bluff. Maria’s journey from a novice into a world-class poker player is a page-turning adventure that you’ll enjoy whether you’re a seasoned pro or someone who doesn’t know a busted draw from a full house.
But what makes The Biggest Bluff so unique is its honesty and humility. It understands the importance of luck and uncertainty in our lives—and how different they can look when we’re suddenly facing high-stakes, life-altering decisions. I can’t think of a better guide for navigating these subjects than Maria and I highly recommend this book.” —Nate Silver, founder and editor-in-chief, FiveThirtyEight