Philosopher of the Heart: The Restless Life of Søren Kierkegaard (Hardcover) 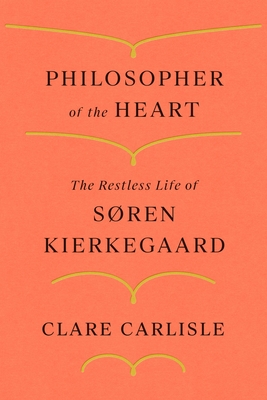 Philosopher of the Heart is the groundbreaking biography of renowned existentialist Søren Kierkegaard’s life and creativity, and a searching exploration of how to be a human being in the world.

Søren Kierkegaard is one of the most passionate and challenging of all modern philosophers, and is often regarded as the founder of existentialism. Over about a decade in the 1840s and 1850s, writings poured from his pen pursuing the question of existence—how to be a human being in the world?—while exploring the possibilities of Christianity and confronting the failures of its institutional manifestation around him.

Much of his creativity sprang from his relationship with the young woman whom he promised to marry, then left to devote himself to writing, a relationship which remained decisive for the rest of his life. He deliberately lived in the swim of human life in Copenhagen, but alone, and died exhausted in 1855 at the age of 42, bequeathing his remarkable writings to his erstwhile fiancée.

Clare Carlisle’s innovative and moving biography writes Kierkegaard’s life as far as possible from his own perspective, to convey what it was like actually being this Socrates of Christendom—as he put it, living life forwards yet only understanding it backwards.

Clare Carlisle is Reader in Philosophy and Theology at King’s College London. She is a regular contributor to the Times Literary Supplement and has written dozens of articles on philosophy for The Guardian. Her book, On Habit, was named an Outstanding Academic Title of 2014 by Choice, and she has recently edited George Eliot’s translation of Spinoza’s Ethics. She grew up in Manchester, studied philosophy and theology at Cambridge, and now lives in Hackney.

"Carlisle . . . has an absolute mastery of Kierkegaard’s life and works. At the same time, she is a lucid and stylish writer who shares some of her subject’s suspicions of the academic approach. She succeeds wonderfully at what is obviously her chief goal, which is to give us some sense of why Kierkegaard’s task mattered so urgently for him, and of why it might matter for us."
—Christopher Beha, Harper's

"[A] sparkling, penetrative new biography . . . With [her] unconventional structure . . . Carlisle is better able to crack open the philosopher's life . . . [Philosopher of the Heart] is an essential guide to those beginning or reembarking on their Kierkegaard journey."
—Sophie Madeline Dess, Washington Post

"Carlisle tells the story out of chronological order and adds passages of novel-like scene-setting . . . The vignettes feel like packaging that the reader must unwrap to get to what is really excellent in the book: Carlisle’s analysis of Kierkegaard’s intellectual milieu."
—Adam Kirsch, The New Yorker

"Carlisle is capable of sketching a vivid picture . . . [T]hose already captivated by Kierkegaard are likely to have their passion reignited."
—Justin Taylor, Bookforum

"Søren Kierkegaard, the influential 19th-century Danish philosopher, has been the subject of many excellent biographies. But none, until Clare Carlisle’s new biography, Philosopher of the Heart, have considered so seriously, and with such depth and eloquence, the issue that surely would have most interested Kierkegaard himself: what it feels like to live the question of existence, the question of how to be a human being . . . A book that seeks to restore the human gravity to Kierkegaard’s life of work, it is as concerned as Kierkegaard himself was with the quiet miracle of how we relate to one another, and to ourselves, in search."
—Lithub

"Extroardinary . . . we are fortunate to have in Carlisle an extraordinarily lucid and perceptive interpreter. Densely researched yet compellingly fleet-footed, Philosopher of the Heart frames Kierkegaard’s writing as a difficult and demanding examination of what it means to be an individual human being in the tumultuous and changing world of 1840s Copenhagen."
—MORTEN HØI JENSEN, The American Interest

"One of Carlisle’s great achievements is to present with an immediacy of feeling both the struggle of Kierkegaard’s life and its mundane reality. Her descriptions of Kierkegaard the writer are strikingly visceral—we can see him pacing his room, writing his life into being at the same time that he is almost literally working himself to death . . . Carlisle’s Kierkegaard reminds us that the solution to this anxiety is not necessarily more freedom, but more love."
—Alan Van Wyk, Christian Century

“Carlisle writes with verve and sympathy . . . this lucid and riveting new biography at once rescues Kierkegaard from the scholars and makes it abundantly clear why he is such an intriguing and useful figure.”
—Adam Philips, Observer

“Philosopher of the Heart enacts Kierkegaard’s audacity and verve . . . in a thrillingly inward and intimate style . . . unashamedly subjective, lyrical, impassioned and impatient with the buttoned-up, life-denying formality of conventional philosophy – conventional biography too, for that matter. Those qualities make her study of this ironic, ecstatic and anguished outsider a deep pleasure . . . Carlisle sketches the social and intellectual backdrop to [Kierkegaard’s] dozen years of intensive ‘authorship’ with flair and insight.”
—Boyd Tonkin, The Arts Desk

"[A]bsorbing and captivating . . . Philosopher of the Heart does what the best biographies do: It sends us back to Kierkegaard's time so we can see for ourselves the beauty, intricacy and literary artistry of what he accomplished."
—Henry L. Carrigan Jr., BookPage

“Engrossing . . . Carlisle has pulled off the feat of writing a truly Kierkegaardian biography of Kierkegaard. Just as Kierkegaard’s pseudonymous writings were meant to enable the reader to understand different modes of existence from the inside, Carlisle’s biography takes us inside Kierkegaard’s troubled, complicated life, portraying a man who both compels and repels in turn.”
—Julian Baggini, Financial Times

“It is a testimony to [Carlisle’s] skill that, as in a great novel, the portrayal of her protagonist is so vivid . . . She wonderfully conveys how, pelican-like, Kierkegaard tore his philosophy from his own breast.”
—Jane O’Grady, Daily Telegraph

“Clare Carlisle’s biography of Kierkegaard is impressively well researched, and brings its subject vividly alive . . . Carlisle provides us with lucid, perceptive accounts of Kierkegaard’s writings, which make stringent intellectual demands on the reader. She is illuminating about some of the rather obscure scholars who influenced his work, and valuably explores his relations with Romanticism.”
—Terry Eagleton, London Review of Books

“This is an innovative and significant book written by one of the leading authorities on Kierkegaard today . . . exactly as Kierkegaard would have wished."
—Peter Vardy, Church Times

"Carlisle is not after a biography that considers Kierkegaard’s life from the perspective of a detached spectator, but one that “joins him on his journey and confronts its uncertainties with him”. She has good Kierkegaardian reasons for such an approach . . .Carlisle attends carefully to who this person was, and holds him – warts and all – in loving regard. According to Kierkegaard’s own pen, that is what the gaze of love does."
—Amber Bowen, Mere Orthodoxy

“Clare Carlisle’s Philosopher of the Heart is one of the best biographies of modern masters by a new generation of women scholars.”
—Daniel Johnson, Standpoint

“Carlisle’s imaginative structure and lucid prose are not the only refreshing things about this philosophical biography . . . One of Carlisle’s achievements in Philosopher of the Heart is to communicate Kierkegaard’s universal appeal and relevance, while always attending to the Christian particularity of his self-understanding and worldview. The Kierkegaard of Philosopher of the Heart may not be the Kierkegaard that some readers are expecting or hoping to encounter in its pages, but he is a Kierkegaard that is all the more authentic and radical for this.”
—Ruby Guyatt, Review 31

“Clare Carlisle’s biography of Kierkegaard experiments with tradition and does something new – as befits the kind of philosopher she is writing about . . . A litmus test for an intellectual biography like Philosopher of the Heart is to ask whether it will motivate readers who are not familiar with Kierkegaard and his philosophy to read his work. The answer is a resounding yes. [Carlisle] provides lucid summaries of his main works and conveys the relevance of his thought for modern audiences.”
—Sean Sheehan, The Prisma

“Insightful . . . Clare Carlisle clearly knows her subject inside and out . . .Carlisle has an impressive grasp of what makes her subject tick. We feel as though we are right there with Kierkegaard as he frets about how he is perceived, and then frets some more that he’s prone to such vanity."
—Rory Kiberd, The Business Post