Heavier Than Heaven: A Biography of Kurt Cobain (Paperback) 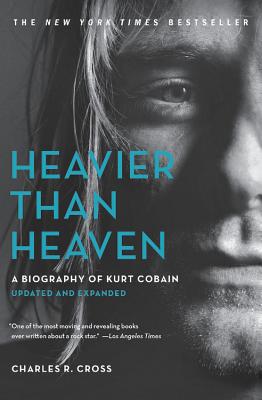 The New York Times bestseller and the definitive portrait of Kurt Cobain--as relevant as ever, as we remember the impact of Cobain on our culture twenty-five years after his death--now with a new preface and an additional final chapter from acclaimed author Charles R. Cross.

It has been twenty-five years since Kurt Cobain died by his own hand in April 1994; it was an act of will that typified his short, angry, inspired life. Veteran music journalist Charles R. Cross fuses his intimate knowledge of the Seattle music scene with his deep compassion for his subject in this extraordinary story of artistic brilliance and the pain that extinguished it. Based on more than four hundred interviews; four years of research; exclusive access to Cobain's unpublished diaries, lyrics, and family photos; and a wealth of documentation, Heavier Than Heaven traces Cobain's life from his early days in a double-wide trailer outside of Aberdeen, Washington, to his rise to fame, success, and the adulation of a generation. Charles Cross has written a new preface for this edition, giving readers context for the time in which the book was written, six years after Kurt's death, and reminding everyone how fresh that cultural experience was when the interviews for the book were done. The new final chapter will update the story since, regarding investigations into Cobain's death, Nirvana's induction into the Rock N Roll Hall of Fame, and how their place in rock history has only risen over the decades.

Charles R. Cross was editor of The Rocket, the Northwest's highly regarded music and entertainment magazine and the first publication to do a cover story on Nirvana. He is also the author of Room Full of Mirrors: A Biography of Jimi Hendrix; Led Zeppelin: Heaven and Hell; Backstreets: Springsteen, the Man and his Music; Nevermind: The Classic Album; and Here We Are Now: The Lasting Impact of Kurt Cobain. His writing has appeared in Rolling Stone, Esquire, and Spy, among many other publications. He lives in Seattle.

"One of the most moving and revealing books ever written about a rock star."—Los Angeles Times

"As engrossing as a good novel. A remarkable
portrait."—Entertainment Weekly